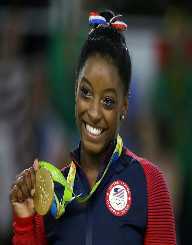 Simone Biles was born on the 14 March 1997 in Columbus, Ohio. She was adopted and raised by her maternal grandfather and his second wife who also adopted her sister Adria.

Her adoptive mother/step-grandmother Nellie encouraged Biles after she showed an interest in the sport from a very young age.

Simone Biles was homeschooled and graduated in 2015.

Simone Biles is starting competing in 2007, and five years later, she was rated at the junior elite level.

In 2011 at the American Classic, she won the vault and balance beam events, finishing third overall. The following year she again did well, winning the all-around and vault events in four competitions: American Classic, the Alamo Classic, the Houston National Invitational and the Secret U.S. Classic.

Then in 2013, became the first female African-American athlete to win gold in the all-around at the World Championships. In 2014 Simone Biles repeated her success by winning both the US and World titles in all-around competition. She also did well at the Secret US Classic winning gold in balance beam, vault, floor exercise and then won the all-round at the Secret US Classic. She won her third consecutive world all-round title in 2015.

At the Rio Summer Olympics in 2016, Simone Biles led the US team which became known as The Final Five. She had a very successful competition and won gold in the women’s all-round, floor exercise and vault with one bronze in the balance beam.

Simone Biles is one of America’s most decorated gymnasts. She holds nineteen World Championship and Olympic medals.

Around the time of the 2016 Olympics, her biological mother announced that Simone Biles had reconciled with her daughter.

Simone Biles is a Roman Catholic.