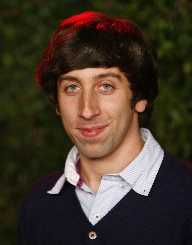 Simon Helberg Maxwell was born on December 9, 1980. He is an American actor and comedian. He is also a musician. He is known for his role in the comedy series ‘The Big Bang Theory.’ He has also appeared in films such as ‘Old School,’ ‘Good Night and Good Luck,’ ‘Walk Hard: The Dewy Cox Story’ and ‘A Serious Man’ among others.

Simon Helberg was born on December 9, 1980, in Los Angeles in California. He was born to Sandy Helberg, an actor, and Harriet Helberg, a casting director. He attended Crossroads School in Santa Monica in California. He later joined New York University’s Tisch School of the Arts. At the school, he trained as the Atlantic Theatre Company.

Simon Helberg later had a supporting role in ‘Studio 60 on the Sunset Strip’. In 2007, he got a role in the film ‘Walk Hard: The Dewey Cox Story’. In the same year, he was also cast in the series ‘The Big Bang Theory’ which continues to air to date. He has also appeared in the series ‘The Guild’ and ‘Dr. Horrible’s Sing Along Blog’. In 2009, he appeared in the film ‘A Serious Man.’ In 2013, his role in the series ‘The Big Bang Theory’ won him a Critics’ Choice Television Award. In 2016, he starred in ‘Florence Foster Jenkins’ alongside Meryl Streep and Hugh Grant.

In 2007, Simon Helberg married actress Jocelyn Towne with whom he has two children, Adeline and Wilder Towne Helberg. He holds a black belt in Karate. He is currently thirty-six years old.