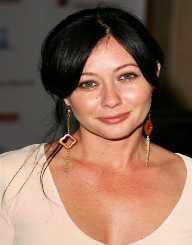 Shannen Doherty is an American actress who is best known for her roles in Beverley Hills 90210 and Charmed.

Doherty began acting very young. She had minor parts in the shows Voyagers and Father Murphy. Her big break came when she was eleven years old and was cast in the show, Little House on the Prairie. However, the show was canceled in 1983. Her first live-action movie role was in 1985’s; Girls Just Want to Have Fun, which also featured Helen Hunt and Sarah Jessica Parker. The following year Doherty was cast in Our House. Doherty played Kris Witherspoon, the eldest daughter of the main family on the show. The show aired for two seasons and forty-six episodes. Doherty also appeared in an episode of Magnum P.I. Doherty’s performance as the bulimic teenager Heather Duke in the film Heathers garnered her a lot of critical praise. Following her performance in Heathers, Doherty was cast in the TV show Beverley Hills, 90210. The show proved quite popular and held an average viewing audience of fourteen million in the United States of America. The show was also picked up by some countries across the world. Doherty left the show after four seasons and the height of the show’s popularity.

Doherty posed for Playboy sometimes during this time; she would again feature in the magazine in 2003. Doherty made a cameo appearance in the Leslie Neeson classic comedy, Naked Gun 33 1/3: The Final Insult. She also featured in the 1995 movie Mallrats. Much of the rest of the decade saw Doherty appear in made for TV films. In 1998, Doherty landed her second major role in hit TV show when she was cast in Charmed. Doherty played Prue Halliwell the eldest of three sisters who are witches and must protect the world from demons. The show gained a cult following and averaged around seven million viewers in America. Doherty left the show after three seasons and was replaced by a character played by Rose McGowan. It was reported that there was friction between Doherty and co-star Alyssa Milano. She made a cameo as herself in Jay and Silent Bob Strike Back, Jay and Silent Bob are characters in Mallrats.

Doherty appeared in a long line of unsuccessful TV shows and made for TV films after leaving Charmed. In 2008, she again played Breda Walsh, her Beverley Hills, 90210 characters, in 90210, a spin-off of the original. Doherty appeared in eight episodes of the new show. Doherty was the first celebrity eliminated from the tenth season of Dancing with the Stars.

Doherty married Ashley Hamilton in 1993. The couple divorced a year later. Doherty married Rick Salomon in 2002, but the marriage was then annulled after nine months. In 2011, Doherty married a photographer, Kurt Iswarienko. Doherty was fined fifteen hundred dollars in 2001 for drink driving. Doherty suffers from Crohn’s Disease, an inflammatory bowel disease. In 2015, Doherty announced that she was undergoing treatment for breast cancer. She has experienced a mastectomy as part of her treatment. Doherty is a registered Republican. She also a keen supporter of the marine conservation organization The Sea Shepherd Conservation Society.