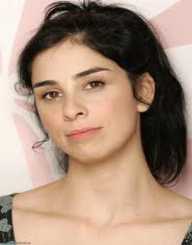 Sarah Silverman, the American crude comedian, was born on December 1, 1970, in Bedford, New Hampshire. Born in a Jewish family, she was brought up in Manchester, New Hampshire. Her mother Beth Ann was a photographer working as George McGovern’s personal campaign photographer and was the founder of the theater company, New Thailan Players. Donald Silverman, Sarah’s father, was a social worker & ran a cloth shop named ‘Crazy Sophie’s Outlet’. Though her parents got divorced when she was six years old, Donald made sure he stayed close to his children and moved to a house very near to the family home in New Hampshire.

Sarah is the youngest of the 5 siblings with 3 sisters and a brother. Unfortunately, her brother Jeffrey Michael died when he was 3 months old. Her 3 sisters are Rabbi Susan Silverman, screenwriter Jodyne Silverman, and actress Laura Silverman. Though ethically Jewish, Sarah Silverman considers herself to be a secular and non-religious person. Sarah was taught the art of shocking people first by her father Donald. As soon as she could speak, Sarah was taught to swear by her father.

Sarah Silverman completed her formal education from The Derryfield School, Manchester. Sarah developed an inherent love for comedy and appeared on stage for her first stand-up routine at the age of 12 in Boston. During high school, she also participated in musical theater productions. Post graduation, she enrolled into the New York University to study dramatics. However, instead of focusing on her studies, Sarah spent a large portion of her time trying to find opportunities at local comedy clubs. Eventually, she dropped out of NYU to pursue a full-time career in comedy.

After her first stand-up performance in 1992, Sarah Silverman started performing at open mic gigs in and around Manhattan. During one of the gigs, she caught the attention of a scout who worked for the legendary television show, ‘Saturday Night Live’ (SNL). In 1993, Silverman received her big break as she bagged herself the position of a writer and featured player in Saturday Night Live. However, her dream job lasted only for 18 weeks. She was fired from the show after just one season. Though she did appear on the show in small supporting roles,, only one of her character sketches made it up to the dress rehearsals. None of them were aired as her jokes were tagged nonconformist.

The abrupt end of her dream job did harm Sarah Silverman's confidence but the phase didn’t last long. Sarah soon bounced back to the television circuit in 1995 with ‘Mr. Show’. The HBO sketch comedy also featured Bob Odenkirk and David Cross. In the following year, she did guest appearances on The Larry Sanders Show. In one episode of the show called ‘The New Writer’, Sarah parodied her stint on SNL, playing the role of Sander’s new writer whose jokes were not used due to the bias of the male chief comedy writer who preferred the jokes of his male co-writers. She also appeared in the final two seasons of The Larry Sanders Show.

In 1997, Sarah bagged the leading role in Sam Seder’s independent film ‘Who’s the Caboose?’ which revolved around the journey of two comedians going to Los Angeles during pilot season trying to get work in television series. The film also featured many young stand-up comedians but did not receive a widespread theatrical release. She and Seder reunited once again to make a sequel titled Pilot Season which was a six-episode television series & Silverman played the same character as the one in the film.

Sarah Silverman's acting skills also won her small roles in a variety of films like ‘There's Something About Mary’, ‘School of Rock’, ‘Screwed’, ‘Heartbreakers’, ‘The Way of the Gun’, ‘School for Scoundrels’, ‘Rent’ and many more. Sarah’s television and film careers ran parallel to each other. She was often cast in a stereotypical role as a mean-spirited, pushy friend. In July 2007, she made her network stand-up comedy debut on the Late Show with David Letterman.

Sarah Silverman started performing in a one-woman show titled ‘Jesus Is Magic’ in Los Angeles. On this show, she managed to crack many unique jokes on off-limit subjects including the September 11th terrorist attack and the Holocaust. Later, in 2005, based on this one-woman show, she released a concert film ‘Sarah Silverman: Jesus is Magic’. The film was directed by Liam Lynch & distributed by Roadside Attractions. The film received mixed reviews from the critics with a box office collection of approximately US$1.3 million. As a part of the film’s publicity strategy, Sarah appeared online in Slate Magazine, as the cover subject of Jewish magazine, Heeb and in roasts on Comedy Central hosted by Pamela Anderson and Hugh Hefner.

Sarah Silverman's career graph was on the rise as she donned various comic and serious roles. She enacted the role of a therapist in the skit for the DVD of the album ‘Lullabies to Paralyze’ by the band Queens of the Stone Age. She also appears at the end of the video of ‘Death to All But Metal’ by American glam metal band, Steel Panthers. Sarah was also a part of Jimmy Kimmel Live! where she parodied sketches from Chappelle’s show. In 2006, Sarah Silverman was placed 50th on Maxim Hot 100 List and in 2007 she ranked 29th and appeared on the cover.

Silverman reached the zenith of her success with her television sitcom, The Sarah Silverman Program. Her flagship show debuted on Comedy Central in 2007 and garnered over 1.8 million viewers. Owing to its politically incorrect humor, the series turned out to be Comedy Central’s one of the most popular shows. The series portrayed the day-to-day adventures of the Silverman sisters and their friends. For her acting on this show, Silverman was nominated for the Primetime Emmy Award.

In June 2007, Sarah Silverman played host for the MTV Movie Awards & in September 2007, she appeared at the MTV Video Music Awards. She was also seen making a guest appearance as Marci Maven in the second season of the USA cable program ‘Monk’. She was also part of ‘Strange Powers’ a documentary on cult songwriter Stephen Merritt and his band Magnetic Fields. In 2010, she turned into a writer and wrote her comic memoir ‘The Bedwetter: Stories of Courage, Redemption and Pee’.

2011-Present: Dramatic Performance in ‘Take this Waltz’ and Other Projects

In 2011, Sarah Silverman was cast in a dramatic role named Geraldine in the film ‘Take this Waltz’, written and directed by Sarah Polley. The film which also featured Michelle Williams and Seth Rogen in major roles was premiered at Toronto and was well received. Later in 2012, Sarah did a voiceover for Vanellope von Schweetz, one of the main characters in the Disney animated movie ‘Wreck-It Ralph’. JASH, a Youtube comedy channel that premiered on March 10, 2013, has Sarah as one of the members of the creative team. She also played the part of Ruth, a prostitute, in Seth MacFarlane’s western comedy film, A Million Ways to Die in the West. Furthermore, Sarah is expected to star alongside Patti LuPone and Topher Grace in People in New Jersey, a situation comedy pilot being produced by SNL’s Lorne Michaels.

In January 2008, Sarah Silverman appeared on Jimmy Kimmel Live! to show Kimmel, her then boyfriend a video called ‘I’m fucking Matt Damon’. The video which instantly became a Youtube Sensation featured Matt Damon and Silverman singing a duet about having an affair. At the 60th Primetime Emmy Awards, Silverman won the Emmy Award for Outstanding Music and Lyrics for this song. She also won a Creative Emmy Awards for writing the song.

Silverman was also nominated for Screen Actors Guild Award for her performance in ‘I Smile Back’.

Right from the beginning of her career, Sarah Silverman has been controversy’s favorite child. In July 2001, she stirred up a major controversy when she appeared for an interview on NBC’s Late Night with Conan O’Brien. Silverman used an ethnic slur for Asians which lead to a huge outcry amongst the viewers. Though NBC issued an apology for the incident, Silverman refused which led her to receive a number of hate letters.

Her performance in the documentary film The Aristocrats (2005) was also a cause for a minor controversy as she was seen accusing Joe Franklin, a New York radio and TV personality, of raping her.

Sarah Silverman believes that she is a liberal, gay marriage supporting, crude comedienne. Sarah made her mark in the political world during Obama’s 2012 reelection campaign. She made a series of humorous videos supporting Obama and the Democrats. At that point of time, her videos were the most popular political videos in the country.

In 2015, Sarah Silverman endorsed Democratic Presidential Candidate Bernie Sanders. When Sanders failed to clinch the nomination, Silverman turned to support Hillary Clinton when she spoke at the 2016 Democratic National Convention. She also received flak for asking die-hard ‘Bernie or Bust’ supporters to stop being ridiculous and support Clinton. Sarah Silverman had also signed an open letter addressed to Angela Merkel and Nkosazana Dlamini-Zuma which urged them to focus on women.

Sarah Silverman became a vegetarian at the age of 10. She is also a non-alcoholic. At the tender age of 14, she started suffering from depression. Silverman has been very open about her lifelong battle with clinical depression which resulted in her becoming an addict to the drug Xanax. Even during her teenage years, Silverman was unable to overcome the problem of bedwetting. Amongst other subjects, she also explores her struggle with bedwetting in her autobiography – The Bedwetter. In July 2016, Sarah Silverman fought for her life as she was diagnosed with a freak case of the epiglottis and spent a week in the intensive care unit at Cedars Sinai Hospital.

Sarah Silverman has been romantically linked with many of her co-stars and actors viz. Dave Attell, Colin Quinn & Tom. She began dating Jimmy Kimmel in 2002 and the relationship lasted for 5 years. She also dated American television writer Alec Sulkin for a few months and comedian, Kyle Dunnigan. Since January 2014, Silverman has been dating Welsh Actor Michael Sheen.

Till date, Sarah Silverman is best known for her tongue-in-cheek humor and sassy remarks. She rose to prominence with her satirical comedy and is renowned as America’s best controversial comedienne.