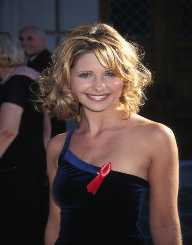 Sarah Michelle Gellar is an American actress who is best known for her portrayal of Buffy Summers in the TV series, Buffy the Vampire Slayer.

Gellar was born on 4 April 1977 in New York City. Gellar’s parents are Arthur Gellar and Rosellen née Greenfield. Gellar’s parents divorced when she was just seven years old. Gellar lived with her mother after the divorce and had little or no contact with her father for the rest of his life. As a child, Gellar practiced Tae Kwon Do as a child and became a black belt. She also figures skated competitively. Gellar had great difficulties with schooling, although was exceedingly bright and achieved high grades. She was bullied at Columbia & Preparatory School due to her needing a partial scholarship to be able to afford to attend. Gellar moved to the Fiorello H LaGuardia High School of Music & Art and Performing Arts but again suffered difficulty due to her missing copious amounts of class to attend auditions and acting jobs. Gellar graduated from the Professional Children’s School, a school set up for children in the performing arts, with a 4.0 grade point average.

Sarah Michelle Gellar began acting aged four. She was invited to audition for a part in Invasion of Privacy, a made for television film on CBS. A young Gellar was banned from all McDonald’s restaurants after a lawsuit over her performance in a Burger King advertisement where Gellar claimed to eat only Burger King and never McDonald’s. Gellar also had several small parts in films as a child actress, she also made her Broadway debut at nine years of age in a production titled, The Window Claire. Gellar hosted a teen talk show called Girl Talk in 1989. She acted in the successful 1991 mini-series, A Woman Named Jackie. The following year Gellar got a starring role in a series focussing on wealthy teenagers, the show ran for one year and was called Swans Crossing.

Gellar then got a major break by landing a role in the soap opera All My Children. The show had been running since 1970 and was very popular. Gellar played the long-lost daughter of one of the show’s long-running characters. Gellar received a critical acclaim for her role in the show, but she left in 1995 to seek opportunities outside the soap opera medium. The following year Gellar auditioned for a support role in the Joss Whedon written TV series, Buffy the Vampire Slayer. After screen-testing Gellar asked to audition for the title role in the show and was so impressive producers granted her the role. The show was a hugely popular hit and also received critical praise. Gellar’s role was that of a high school cheerleader who is tasked with protecting the world from evil. Buffy Summers, Gellar’s character, is a slayer, a young woman chosen by Fate to battle monsters. As the slayer she has extraordinary strength and healing powers as well as the ability to see into the future during her dreams. The show had a great impact on television showing that teen horror could be famous and involve clever writing. The show also featured controversial sex scenes, often involving Gellar’s character. The show ran for seven seasons and one hundred and forty four episodes and also launched a successful spin-off, Angel.

In 1997, Gellar was cast her first major film role when she took the role of Helen Shivers in I Know What You Did Last Summer. The film was a horror slasher that saw our youths stalked a year after the covered up a hit and run. The film grossed an impressive one hundred and twenty five million dollars. Gellar appeared in another slasher film in 1997, Scream 2, the sequel to the famous Scream. The film earned one hundred and seventy two million dollars at the box office. The following year Gellar had a small voice role in the film, Small Soldiers. She also hosted the hit American comedy show, Saturday Night Live, in 1998 for the first time. 1999 saw Gellar star in her first box office bomb, Simply Irresistible. The film was a romantic comedy and Gellar played the owner of a failing restaurant. As well as being a commercial failure, the film was also poorly received by critics. However, Gellar quickly bounced back in Cruel Intentions. The film was a remake of a French romantic drama and cast Gellar as a manipulative coke addict. It grossed seventy five million dollars and Gellar received praise for her performance.

In 2002, Gellar appeared in the live action film of Scooby-Doo. The film grossed over two hundred and seventy five million dollars and spawned a sequel in 2004, Scooby-DooMonsters Unleashed, in which Gellar reprised her role as Daphne Blake. Gellar received mixed reviews for her performance in the horror film, The Grudge, but the movie was commercially successful grossing nearly one hundred and ninety million dollars. The 2006 sequel, The Grudge 2, proved less successful. In 2007, Gellar provided the voice of reporter April O’Neil in TMNT. In 2011, Gellar starred in and was an executive producer on the show, Ringer. It developed a cult following and limited praise, but was cancelled after one season. Gellar co-starred with Robin Williams in the 2013 TV series, The Crazy Ones. The show opened strongly, but ratings soon declined and only one season was made.

Gellar married Freddie Prinze Jr. in 2002. The pair had worked together on I know what You Did Last Summer in 1997 and began dating in 2000. They also co-starred in the live-action Scooby-Doo films. Together they have two children.