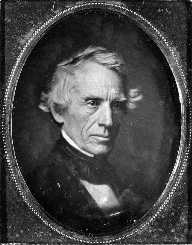 Samuel Morse was widely known as a remarkable painter and at the same time an inventor. He is precisely known for inventing a single-wired telegraph system. He was brought up by a well-to-do family, but he was fully recognized due to his artistic work. French aristocrat Marquis de Lafayette and President John Adams noticed his talent when he painted their portraits. Although he wanted to concentrate on the branch of physics, his wife’s demise made him change his mind. That is when he came up with an idea of contriving a gadget that authorized long distance communication. After several falls and fails, he finally created a system that drastically changed the world. He re-invented Morse codes that are still used to date.

On April 27, 1791, Samuel Morse was born in Boston, Charlestown in Massachusetts to Elizabeth Ann Finley Breese and Jedidiah Morse. As a young lad, he joined Philips Academy and later went to Yale University. Here he studied mathematics, science, and religious philosophy. He then took a painting job just to bring basic needs. Morse graduated in 1810 with Phi Beta Kappa honors. He was advised to move to England due to his artistic work that was recognized by Washington Allston.

While in England, Samuel Morse perfected in his painting career that he was accepted at the Royal Academy. Legend artist like Michelangelo inspired him to create Dying Hercules paint. The masterpiece illustrated the political views in British. He later went to the US in 1815 where he was summoned to paint great portraits of the so-called famous people such as President James Monroe and John Adams.

Early in 1825, Samuel Morse painted a Lafayette portrait in Washington. The same year he received a letter that stated about his wife’s illness. He later received another letter about his wife’s demise. He arrived at her home where he found that he was already buried. This saddened him, and that’s where he came up with an electromagnetic device that gave a chance to further communication.

Morse moved to the US in 1832 where he met Charles Thomas, a guru in electromagnetism. Thomas tried to explain to him different properties of the said subject. He then dropped off his painting job where he concentrated more on electromagnetism field. He invented the first Telegraph in 1835 where he submitted its final design to the United States Patent Office.

Morse’s hard work spoke for itself when Samuel was supported by the New York University guru, Leonard Gale. They partnered together and came up with missing circuits that greatly helped to transmit messages far and beyond. An American inventor, Alfred Vail joined them where he funded the project until its end.

In 1838, Samuel demonstrated his invented device to the public in New Jersey. He went to Washington to wait for another federal sponsorship without success. After wandering for some time, he gained financial support. This encouraged him to construct a telegraphic line that passed through Baltimore and Washington DC. The line was officially opened in 1844.Following immense success; it gave birth to Magnetic Telegraph Company in 1845.The company constructed new lines between Boston, New York, Mississippi, and Philadelphia.

Morse became a happy man in 1847 where he received a license for his hard work. After two years, he was selected to chair for the Associate Fellow of the American Academy of Science and Arts. This gave him a chance to establish telegraphic lines across the world. After a long wait, Morse gained his recognition for the US government and other European countries. In 1858 he was chosen as the foreign member of the Royal Swedish Academy of Sciences.

Absurdly, he retired from the public eye. This was seen due to a statue that was placed in the New York’s Central Park. Not to mention he last appeared at the New York Academy of Music where he conveyed the final message. During this time he participated in several works including sharing his income with charitable organizations. At the same time, he started to work on a connection between religion and science.

Samuel Morse contribution in Science awarded him countable honors. He was mentioned in the Glory of Order Award by Sultan Mustafa. He later garnered the Great Golden Medal of Arts and Science under Emperor of Austria. The King of Denmark presented him with the Cross of a Knight of the Order, followed by The Commander of the Order of Isabella the Catholic. In 1896 he was presented with a silver certificate from the United States government.

In his lifetime, Samuel married twice. In 1818 he married Lucretia Walker, and they were blessed with three children, James, Charles, and Susan. His first wife died in 1825. He then married Sarah Elizabeth in 1848.The couple was blessed with four children: William, Edward, and Cornella. Samuel breathed his last on 2nd-April 1872 in New York.