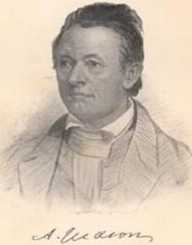 Adoniram Judson, a Baptist missionary, was the first Caucasian Protestant missionary to devote himself to Christianizing Burma. Adoniram Judson, Jr. was born on August 9, 1788, in Malden, Middlesex County, Massachusetts. His father Adoniram Judson, Sr. was a Congregational minister. His mother Abigail (Brown) Judson took care of his studies and taught him to read at a young age. He was sharp, meritorious and brilliant in his studies since his childhood days. He attended the College of Rhode Island & Providence Plantations (now Brown University) and graduated as valedictorian of his class at the age of nineteen.

During his graduation days, Adoniram Judson met Jacob Eames, a skeptic, and persuasive unbeliever. The association and bonding with Eames led him to abandon his childhood faith and the religious instructions he had received from his parents. Unfortunately, Eames died after suffering a violent illness in a room next to Judson’s in an inn. The sudden death of his friend shook Judson. Consequently, he returned to his childhood faith and became a believer again.

Adoniram Judson came back to his home after completing his studies and opened the Plymouth (Massachusetts) Independent Academy. He wrote two textbooks for girls titled ‘Elements of English Grammar’ and ‘Young Ladies' Arithmetic’ while teaching at the Plymouth school. He moved to New York for a brief period trying his hand in writing for the stage. However, the vocation did not elicit any success. Exasperated by the failure, he went to an Uncle’s house, hired a horse and rode west.

During the journey, on one night he stayed in a village inn renting the only vacant room available there. Adoniram Judson was restless throughout the night and could only sleep in the wee hours. His sleep was continuously disturbed by the sounds of people moving about, unusual sounds of moans and gasps resembling death throes. In the following morning, he got the shock of his life upon learning the fact that his so-called mentor Jacob Eames died during the night in a room adjacent to his in the Inn.

Distressed and unable to decide his future course of action Adoniram Judson traveled back to his home in Plymouth and discussed his problem with eminent Christians residing there. He started attending the Andover Theological Seminary and declared his resolve to dedicate himself to God unconditionally. During the final year of his seminary, he decided to become a devoted missionary.

In 1810, Judson associated himself with a group of mission-minded students at Andover who called themselves ‘the Brethren’. They formed the first organized missionary society of America and presented a petition to the General Association of Massachusetts (Congregational) appealing for support. Consequently, the ‘American Board of Commissioners for Foreign Missions’ was established.

The newly established Board sent Adoniram Judson to England on his first assignment to visit the London Missionary Society. Unfortunately, his vessel was apprehended by a private French ship. All the people who were on board the ship, Judson was traveling in, were imprisoned for a short while. He returned to New York in August 1811 and on his way back, he persuaded the Board to move forward without waiting for British aid.

Later in that year, Adoniram Judson was entrusted with the task of preaching Christianity to the East in his role as a committed missionary. He was ordained in February 1812.  On February 19, 1812, Judson along with his newly married wife and three other friends set sail to Calcutta on board the Brig. Caravan. They reached Calcutta on June 17, 1812. During the voyage, his study of the theology of Baptism led to his switching over to Baptist denomination. On September 6, 1812, Judson along with his wife was baptized by immersion in Calcutta by an English missionary associate of William Carey named William Ward.

Soon they found out that the British East India Company and also the local people were against evangelizing Hindus in their area by the Americans. Eventually, Judson was forced to establish his missionary headquarters in Rangoon, Burma (Presently Yangon, Myanmar) on the face of a hostile British East India Company. During their voyage from Calcutta to Burma, Judson’s wife miscarried their first child aboard ship. After reaching Burma, they soon found out that preaching Christianity among the predominantly Buddhist Burmese people is almost an impervious task.

However, Adoniram Judson's firm resolve in this regard led him to study the Burmese language. He already knew Latin, Greek, and Hebrew and learnt to speak Burmese within the next three years. Gradually, he tried to adopt some of the Burmese customs and held his first public meeting on April 4, 1819. A total of 15 people came in his first such Christian service conducted in the native Burmese language. The response was lukewarm and the attention strayed.

However, Adoniram Judson was able to baptize his first Burmese convert, Maung Naw, a 35-year-old timber worker from the hill tribes within a short span of two months from the time of his first Christian service. Though relentless in his effort to spread Christianity and to preach the Gospel of Jesus among the ordinary Burmese people, Judson faced a total lack of interest from them. Making the matter worse, their second child, Roger William Judson died at the age of 8.

Adoniram Judson also translated two books. One is the ‘Grammatical Notices of the Burmese Language,’ and the other one is the ‘Gospel of Matthew.’ Sitting in a Zayat, the customary bamboo and thatch shaded shelter, he continued his public evangelism, and after Baptizing the first native convert on June 27, 1819, he had 18 baptized converts by 1822. He established a Burmese Church and a few schools over the next few years.

In 1824, the first Anglo- Burmese war started. Judson was imprisoned during the war between Burma and Britain. He was held up in many places and was brutally tortured. However, in spite of the extreme sufferings, agony, and misery of his prison life, Judson somehow managed to survive mainly due to his wife’s relentless efforts in this regard. After the war got over, Judson was released and had to work as a translator for the peace negotiation between Burma and the United Kingdom.

Adoniram Judson spent the rest of his life for the cause of Christianity, preaching for evangelism and remained engrossed in his translation and literary works.

Adoniram Judson married Ann Hasseltine on February 5, 1812. She was the first female American missionary. She had a miscarriage and later on gave birth to two children. Both these children died during the initial few years of their life. In 1826, Ann Hasseltine died.

Judson married for the second time in 1834, this time to Sarah Hall Boardman, widow of fellow missionary George Boardman. They had eight children, of whom five survived and grew up to adulthood. His second wife died in the year 1845. He married the writer Emily Chubbuck in 1846, who became his third wife. Out of their two children, one survived.

In 1850, Adoniram Judson, on the advice of his doctors, went on a sea voyage to treat his lung infection. On April 12, 1850, he died on board a ship in the Bay of Bengal. He was buried at sea.