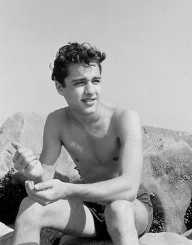 Sal Mineo was an actor who focused on film and theatre, later ventured into television.

Salvatore “Sal” Mineo Jr. was born on 10th of January 1939, in Harlem New York,  to Sal Sr. and Josephine. His father was a casket maker who moved to America from Sicily, while his mother was born in the United States.

Sal Mineo had two older brothers (Michael and Victor) and youngest sister Sarina. His mother Josephine had enrolled him in dancing and acting at the Professional Children’s School around 1948.

When Sal Mineo was nine, he and his brothers became newspaper boys to help pay for the dancing and music lessons.

Sal Mineo later moved to Marie Moser Dance Academy and had his first taste of showbiz dancing in the Ted Steele Show. Following a fight at school with the gang president, Sal followed the street gang to cause more troubles which eventually landed him in court.

Sal Mineo was presented with the option of juvenile confinement or Quintano's School For Young Professionals in Manhattan, which he chose the latter.

In 1950, Sal Mineo was a casting agent and landed the part in Tennessee Williams' play The Rose Tattoo.

Alec Alexander was recommended to represent him at that time, and with that first contract to act in Broadway, eleven-year-old Sal would be earning seventy-five dollars a week. Sal Mineo acting career spelled the end of his formal education, forcing his mother to hire a private tutor.

After a disappointing play called Dinosaur Wharf, Sal landed the role of the young prince in the King and me musical, opposite Yul Brynner. Sal gained a lot of acting help from Yul Brynner.

Sal Mineo transitioned to a movie career when he was sixteen, debuting in Six Bridges to Cross during 1955. During the same year, Sal acting in Rebel Without A Cause, playing John “Plato” Crawford. The role won him an Academy Award nomination.

After Rebel Without A Cause, Sal Mineo landed more movie roles. He was nicknamed the Switchblade Kid, for his role in 1956’s Crime in the Streets.

Sal Mineo is venturing into singing in 1957, recording a few singles and an album Start Moving (In My Direction), which was a gold record.

By 1960, Sal Mineo was too old to play troubled teen characters, and the movie offers slowed down. In 1965, his role as a stalker in “Who Killed Teddy Bear?”, typecast him as a criminal, which he failed to escape from.

Sal Mineo returned to the theatre to direct and feature in “Fortune and Men’s Eyes” in 1969. He modeled for Harold Stevenson in 1963, the painting The New Adam is part of Guggenheim Museum's permanent collection.

Sal Mineo also directed The Medium in 1972; he played the mute Toby while directing the opera.

Sal Mineo admitted his bisexuality in an interview with Boze Hadleigh during 1972. After the admission, Sal continued to appear in television and movie as supporting roles.

Sal Mineo appeared as Dr. Milo in 1971’s Escape from the Planet of the Apes. Sal played Rachman Habib in Case of Immunity, and guest starred in Hawaii Five-O before landing a role play “P.S. Your Cat Is Dead”.

Sal Mineo had twenty-two films in his name and numerous television guest roles.

Exodus won him the Golden Globe for best supporting actor in 1960; he was nominated for Academy Awards for Rebel Without A Cause and Exodus.

Sal Mineo was stabbed in the alley behind his home, in a failed robbery attempt on February 12, 1976.

His killer, Lionel Ray Williams was convicted after bragging about the kill, he was found guilty and sentenced to life imprisonment. Sal was buried near his father at Gate of Heaven Cemetery in Hawthorne, California

Sal Mineo was engaged to Jill Hayworth, whom he met at the set of the film Exodus. She canceled the engagement when she found out that he was having an affair with another man. Sal was dating Ben Sherman.

In the 1960s, Sal Mineo was in a cohabitating relationship with male actor Courtney Burr III, at his death, they were already together for six years.

In 2000, Sal Mineo: His Life, Murder, and Mystery were published by H. Paul Jeffers, and another biography by Michael Gregg Michaud, both giving an insight of Sal’s life. In 2013, James Franco directed his final moments in movie Sal, played by Val Lauren.