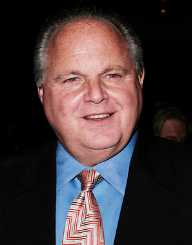 Rush Limbaugh was born in Cape Girardeau, Missouri where he began his career in radio. He started working in radio as a DJ when he was sixteen. He attended college upon the wishes of his parents. However, as said by his mother, he was unable to maintain interest in anything apart from radio. Thus ended his time at Southeast Missouri State University after two semesters and one summer. He after that moved to McKeesport, Pennsylvania. By 1972 he had become a top 40 music DJ in AM radio reaching much of Pittsburg area. He continued to work over the years as a radio DJ until he left radio in 1979 for his stint as a director of promotions for a baseball team, Kansas City Royals.

Rush Limbaugh began his career as a radio talk show host in 1984. He started with an AM radio KFBK in Sacramento. His career and success came in the wake of the repeal of the Fairness Act. This allowed radio talk show hosts to run commentaries without presenting opposing views. Rush Limbaugh thus got free reign to express his conservative views and gain popularity as an illustrious right winger. His success attracted the then ABC Radio president Edwards McLaughlin. Rush after that moved to New York City where he began his career as a host on a national radio show in 1988.

Rush Limbaugh continued to be successful as a radio show host. By 1990 Rush Limbaugh was described in the New York Times by Journalist Lewis Gross Berger as having"more listeners than any other talk show host" Having become a force to reckon with in radio, Rush got a syndicated half-hour live audience television show in 1992 and quit in 1996. This did not last long because he did not enjoy being a television host.

The Rush Limbaugh's radio show currently airs for three hours each weekday in several radio stations all over the United States. And in some states, the show airs every day of the week.

By 2015 Rush Limbaugh’s earning was estimated at $79 million within the preceding twelve months. Forbes positioned him as the eleventh highest paid celebrity in the world and one of the highest paid people in the United States media.

Much of Rush Limbaugh’s career has been spent espousing the Republican principles and criticizing what he often termed the liberal Democrats. His success in radio and his outspoken conservative ideals have caused him to rise to prominence in the Republican Party.

In 1992 he got a letter from President Ronald Reagan, thanking him for all he had done for the Republican Party saying, ‘…you have become the Number One voice for conservatism in our Country.’ Also In 1994, he was awarded an honorary membership among the freshman GOP caucus.

It is no secret that Rush Limbaugh is a Republican through and through. He lives and breathes the Republican conservative ideals. In his summary of the pledge of allegiance, he said ‘In the Pledge of Allegiance we all pledge allegiance to our Republic, not to a democracy. "Republic" is the proper description of our government, not "democracy."’

Rush Limbaugh has never been one to shy away from controversy. He stood by his views no matter how unpopular they were. This has caused a lot of debate over the years, even to the point of losing advertisers. He has been heard making bold and sometimes tactless statements. They include statements like;"Feminism was established to allow unattractive women easier access to the mainstream of society.”

Apart from Feminists, racial minorities, unions, union members, low-income earners, the LGBT community and even celebrities like Oprah Winfrey and Jesse Jackson have felt the butt of his pinching comments.

Rush Limbaugh has also expressed a firm opinion against illegal drug use in the United States. According to him, there was too much leniency in law enforcement against drug users. This was a source of bigger controversy when in 2003 he was reported to be under investigation for illegally obtaining prescription drugs. He later admitted to the truth of the allegations, blaming years of severe back pain as the cause.

His presentation of facts has also been questioned severally. Rush Limbaugh has been accused of distorting facts to suit his political biases. A group called Fairness and Accuracy in Reporting (FAIR) published an issue in their magazine ‘Extra’ that alleged up to fifty different fact distortions in Limbaugh’s commentary as at 1994.

The successful radio host and celebrity has deafness. By 2001 Rush Limbaugh had gone nearly deaf and had to undergo cochlear implant to regain much of his hearing. It was said but inconclusively that his deafness might have been a side effect of his opioids addiction. He also suffered side effects from the cochlear implant that caused him severe eye twitching. He had to undergo a tuning in 2005 because of this.

In 2014 he underwent a bilateral tuning from which Limbaugh testified to having a hundred percent improvement on his deafness.

Rush Limbaugh is a multiple award-winning radio personality. He has won the Marconi Radio Award given by the National Association of Broadcasters as syndicated radio personality of the year five times. In 1992, 1995, 2000, 2005 and 2014 respectively.

In 1993 he was inducted into the National Radio Hall Of Fame.

On March 29, 2007, Rush was awarded the inaugural William F Buckley Jr. Award for Media Excellence, by the Media Research Center.

Rush Limbaugh also received one of his highest awards on the 28th of February 2009. He received from the Conservative Political Action Conference, a document signed by Benjamin Franklin, to be given to someone "who has stood up for the First Amendment called the "Defender of the Constitution Award."

Rush Limbaugh was born into a family of Lawyers which included his father, grandfather, and brother. This consists of a federal judge uncle and cousin. He was named Rush after his grandfather who was a Missouri prosecutor, judge, special commissioner, member of the Missouri House Of Representatives and has The Federal Courthouse in Cape Girardeau named after him. There was a lot expected of him, and he seemed to be the sore thumb of the family choosing a different profession than what the family was known for. According to his biographer, Rush Limbaugh spent a chunk of his life trying to gain his father’s approval.

Rush Limbaugh has been married four times with no children. He is currently married to his wife from 2007, Kathryn Limbaugh.