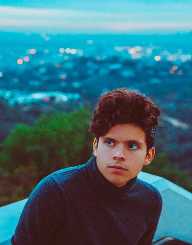 Rudy Mancuso was born on February 27th, 1992. He is a renowned internet personality. He is mostly known on Vine with a huge number of followers amounting to 10.6 million. Through his music talent, he garners millions of views via the videos he regularly uploads over the internet.

Rudy Mancuso was born on February 27th, in 1992. His place of birth was in New Jersey, United States. His parents are from different descents. His father is an Italian-American while his mother is a Brazilian. Right from a tender age, Mancuso began expressing his musical talents by playing the piano.

Upon understanding his strong passion for music, Mancuso delved into the world of social media. This was the direction that led to his unwavering popularity over social networks such as Vine. He credits one of his friends for introducing him to Vine. Initially, Mancuso found the website to be quite different as compared to other social pages. As such, he found some difficulties during the first few moments of using Vine.

After exploring Vine, Mancuso quickly made progress, and he uploaded his first Vine. This was a recording featuring Mancuso and his friends playing Wimboweh which they adopted from The Lion King film. After this, Mancuso popularity grew rapidly as he won over the hearts of many. It did not take time before he was leading in the Vine charts in 2016. During this year, his net worth was about 250, 000 dollars.

Through his popularity, Mancuso has gone along to endorse brands. Aside from this, he has also tried his luck in the film industry with films such as Tough Love -2012, The Keys of Christmas -2016 and Petting Scorpions -2016. He has also featured in two TV series namely Drunk History and Outpost in 2015 and 2016 respectively.

Mancuso is an American citizen. He has an older sister. His dating life has been a wave over social media. He was in a relationship with Maia before breaking up in early 2016.