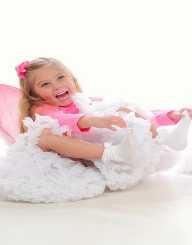 Back in September 2011, the world saw two little girls on YouTube, singing and dancing “Super Bass,” a Nicki Minaj song. One of them was Rosie McClelland, a five-year-old girl then.

With the success of the viral video, the two became Internet Celebrities gaining fans all over the world. Following this, Rosie has performed several covers with her cousin Sophia Grace and appeared in TV shows like The Ellen DeGeneres Show.

Rosie McClelland was born in Essex, England on September 7, 2006. Her mother is Danielle Brownlee. She has a brother named Romeo.

In the September of 2011, the two sisters were playing around when Rosie’s mother decided to dress them up with tiaras.  As Sophia began singing, the lady filmed it on her iPhone and posted the video on YouTube. The video started pulling in an enormous amount of views with many celebrities sharing the video for the cuteness overload.

Rosie doesn’t sing in the video, but her presence gave Sophia the confidence she needed.  Currently, the video has over 52 million views.  The girls found themselves in the spotlight, with their popularity skyrocketing both online and offline.

Not surprisingly, the video caught the attention of Ellen DeGeneres, who invited both Sophia Grace & Rosie McClelland to appear on her show.  The crowd loved them, and they have since appeared several times on the show. The exposure brought in more popularity, and everyone could see two young pop stars in the making.

Rosie McClelland along with Sophia became regulars on The Ellen DeGeneres Show, and every time, the viewers loved them. Soon, they had their own segment Tea Time with Sophia Grace & Rosie.

They have interviewed several celebrities on the segment including Justin Bieber, Taylor Swift, Miley Cyrus, Katy Perry and Hugh Grant. Even Nicki Minaj performed the song “Super Bass” with the duo on the show.

Rosie has a confident and charming personality and wins the hearts of celebrities with her witty interview questions.  Sophia Grace & Rosie have released more than ten music videos, starting with Girls Just Gotta Have Fun. This video was a huge success. Their other popular videos include Girl in the Mirror, Best Friends,&It’s So Good.

Sophia & Rosie have also starred in their movie Sophia Grace & Rosie’s Royal Adventure. Nickelodeon has offered them a five-movie deal. They have also written two Children’s illustrated story books. The first one was very well received and reached #2 spot on the New York Times Bestseller List.

Life As A Famous Kid

Amidst all the glitter, it is easy to forget that Rosie McClelland is also just a kid.

Only ten years of age, she has found fame of the size of Mt. Everest, but under her parents’ care, she leads a normal student life too. McClelland has many friends at school, not just due to her popularity, but because she is a lovely & good-natured little girl. She is set for a great career in the Singing & Film Industry, should she choose to go for one.