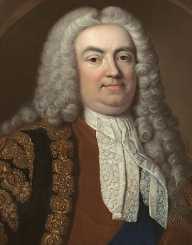 Robert Walpole, a British statesman and the first Prime Minister of Great Britain, was born on August 26, 1676, to Robert Walpole and Mary Burwell in Houghton, Norfolk, United Kingdom. He was the third son and fifth child of his parent’s 19 children. His father was a Whig politician and represented the Borough of Castle Rising in the House of Commons and was a member of the local gentry.

Robert Walpole received his elementary education from a private school at Massingham, Great Dunham, Norfolk. His academic excellence earned him admission at Eton College in 1690. In 1696, he entered King’s College, Cambridge and secured his matriculation on April 2, 1696. On May 25, 1698, he left Cambridge after the death of his only surviving elder brother thereby abandoning his academic career. He had to relinquish his original ambition of becoming a clergyman and started helping his father in managing the family estate.

Robert Walpole inherited the family estate after his father’s death in 1700 and was also immediately elected from his father’s parliamentary seat ‘Castle Rising’ to become a member of the House of Commons. In 1702, he switched his constituency and represented the neighboring constituency King’s Lynn. Barring short intermission, Walpole went on to represent King’s Lynn for the next 40 years.

Following in his father’s footsteps, Robert Walpole also was a member of the Whig Party. In 1705, Queen Anne appointed Walpole as a member of the council of her husband, Prince George of Denmark, Lord High Admiral. The council was in charge of controlling the affairs of the navy, mainly, during the War of the Spanish Succession (1701-1714). An excellent and skillful orator, Walpole soon made his mark in the House of Commons and was able to make rapid progress in his political career. He was appointed to the position of Secretary at War on February 25, 1708, and made the Treasurer of the Navy in 1710.

In the general election of 1710, Tory Party came to power. Walpole was dismissed as the Treasurer of Navy on January 2, 1711. His Whig party became the main opposition party, and Robert Walpole became the most outspoken member of the opposition. In 1712, Walpole was accused of dishonesty and faced corruption charges. As the Tories were desperately trying to undermine him after their unsuccessful attempts of convincing him to join their party, Walpole was pronounced guilty of a high breach of trust and notorious corruption though it was proved that he had not accepted any money. He was impeached by the House of Commons, found guilty by the House of Lords and was sent to the Tower of London for six months imprisonment. Thus, the Tory Party’s plot to finish him politically became temporarily successful.

At the Tower of London, Robert Walpole was visited by all the Whig leaders and was regarded as a political martyr. He was reelected from King’s Lynn in 1713 after his release. After the death of Queen Anne in 1714, her second cousin, the Elector of Hanover, George I succeeded the Throne. He distrusted the Tories and believed them to be against his accession to the crown.

The Whig party came back to power in 1714, and Robert Walpole was appointed as the Privy Councilor and Paymaster of the Forces. As Chairman of the secret committee, Walpole successfully took revenge of his earlier impeachment by impeaching the two Tory leaders, Robert Harley, Earl of Oxford, and Henry St. John, Viscount Bolingbroke on account of treason. The two were the ones who were responsible for his impeachment and subsequent imprisonment.

Making rapid progress, Robert Walpole first became Lord of the Treasury and Chancellor of the Exchequer on October 11, 1715. During his tenure as the Lord of the Treasury and the Chancellor of the Exchequer, he and his brother-in-law Lord Townshend were at loggerheads with two of the other cabinet members, Lord Sunderland and James Stanhope, on most issues. As King George I was favouring Sunderland-Stanhope ministry on most of the issues, Walpole resigned from the cabinet in April 1717 and soon joined the opposition.

The Prince of Wales, who was in opposition with King George I, favoured Walpole and Walpole subsequently became the advisor of the Prince of Wales. For the next three years, Walpole fought and opposed every move of the Government which led to the rejection of the Peerage Bill (1719).

Robert Walpole with his expertise and maneuvering skills brought about the reconciliation between the two warring royal family members, King George I and Prince of Wales in April 1720. He subsequently returned to the ministry as paymaster general of the forces. During Walpole’s return to the cabinet, Britain was sweeping through a wave of speculative frenzy associated with the South Sea Company. Against the popular belief, the company collapsed which caused a major financial disaster and led to huge monetary losses.

Members of the cabinet including his nemesis Sunderland and Stanhope were held responsible for the disaster. However, Walpole saved both of them from punishment and earned the nickname ‘The Screen’ and ‘Screenmaster-General.’

In 1721, the death of Stanhope and resignation of Sunderland made Robert Walpole the most influential figure in the cabinet and his election as the leader of the House of Commons coincided with his term as the first Prime Minister of Great Britain. He was also appointed as the First Lord of the Treasury and the Chancellor of Exchequer. After steering the country through thick and thin, Walpole finally resigned from the government on February 2, 1742, marking an end to his long, eventful and illustrious political career. He holds the record as the longest serving Prime Minister in the history of Great Britain.

Robert Walpole married Catherine on July 30, 1700. She died on August 20, 1737, after giving birth to two daughters and three sons. After the death of Catherine, Walpole married his longtime romantic partner Maria Skerrett on March 1738. They were blessed with a daughter born before their marriage.

Walpole passed away on March 18, 1745, after a rapid decline in his health since 1744. He was interred in the Parish Church of his home estate in Houghton, Norfolk.