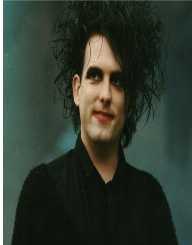 Robert Smith is widely known as the leading singer of the well-known brand in British- The Cure. He is an English artist who is also known for his ponderous makeup. It is quite difficult to recognize him when on stage due to his black-lined eyes and overly red lips. But his smothering sound defines his stance. He likes to mix different types of music genres starting from new wave, gothic rock and few post-punk. His musical background came from his family and inspiring artists such as The Beatles and David Bowie. He knew how to play guitar at the age of 12.In short, he makes a remarkable instrumentalist. Besides, he possessed a unique music style that depicted a solid foundation in the music industry.

On April 21, 1959, Robert James Smith was born in Blackpool, Lancashire to Rita Mary and Alexander Smith. He is the child of four siblings. At three years old, they moved to Horley in Surrey where he joined St. Francis Primary School. They later moved to Crawley where he joined Notre Dame Middle School along with St. Wilford’s Comprehensive School. Robert and his siblings were fully supported by their parents to follow their dream. By the age of 12, he already knew how to play several instruments including guitar.

At 14 years old, Smith commenced his musical career by starting The Crawley Goat Band. His sister, Janet, and brother, Richard was also the part of the band. Early in 1976, he formed Easy Cure group in partnership with Paul Thompson, Michael Dempsey, and Laurence Tolhurst. He later changed the band’s name to The Cure. The band got a job at a Fiction Recording label.

In 1978 The Cure band cemented their reputation by releasing Killing an Arab as well as 10:15 singles. They followed it up with Three Imaginary Boys debut album. During this time, Robert became the most notable writer of the mentioned songs. They then collaborated with Siouxsie and the Banshees under Chris Parry’s recording titled as Fiction Records.

In 1979 they went on a tour with one the Banshees member with the aim of promoting their second album named Join Hands. They followed it up with their third album in 1980 titled Seventeen Seconds and A Forest single. Both did acclaimed reviews. Robert Smith later launched his solo album The Top in 1984 where he played most of the musical instruments. In 1989 he launched Disintegration song that topped number three in the United Kingdom and number twelve in the United States. I Wish the ninth album that The Cure Band released in 1992.The album comprised of Friday I’m in Love and High song.

From 2000 henceforth he managed to record great albums such as The Cure, 4:13 Dream and Blood followers. From 2010 to 2012 Smith started to perform as a solo artist where he partnered with an acclaimed artist. During this time, he released Witchcraft followed by Very Good Advice.

In 1989 Robert Smith released Disintegration album that topped number three. Besides, he managed to sell over two million copies globally. The song is still envied to date. In 1992 the band released Wish album that turned into an immediate hit. To his shock, it cemented the number one position in the United Kingdom.

The single Lullaby song that he released in 1989 received the Brit Award. Robert Smith also won the Godlike Genius Award for appearing in the Mighty Boosh film. He later received an Ivor Novello Award for Global Achievement. Robert Smith married her longtime partner, Theresa Poole in 1988. He dedicated his single song ‘Love Song’ as his best wedding present. The couple joined together, and they opted not to bring up their children.