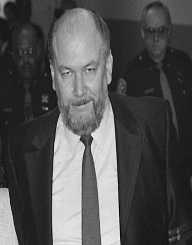 Richard Kuklinski was an American serial hitman who offered his services to the highest bidder. His services were well sought by the mafia family gangs in the USA.

Richard Leonard Kuklinski was born on April 11, 1935, in New Jersey. His parents were of mixed European ancestry. His father Stanislaw was Polish, while his mother Anne was Irish. The second born in a family of four siblings, Kuklinski was prone to violence from an early age. His father was an abusive alcoholic, while his strict mother was a notorious disciplinarian. One of Kuklinski’s brothers died of beatings received from his father.

Crime seemed to have been the order of the family. His younger brother was later convicted of raping and the murder of his 12-year-old victim. Kuklinski’s mother was also said to have been assaulted by a priest while she was young. Thus, she believed in the strict religious discipline to help her children be upright citizens. Kuklinski grew up without his father. Stanislaw abandoned his family after killing his son and lying to the police. Kuklinski never graduated from school. He dropped out of education in the eighth grade.

Having inherited a life of abuse from his parents, Kuklinski was full of pent-up anger. To deal with his anger, he resorted to killing the cats in the neighborhood. The little Catholic altar boy was slowly turning into a killer. In 1949, at the age of 14, he killed his first human victim. He waylaid Charley Lane and killed him. Lane was street gang bully who had accosted Kuklinski on several occasions.

His crime went unnoticed by the police. The gangs took notice of him. With the peddling of pornographic videos giving him a crime exposure, Kuklinski started working with the Gambino family. As an apprentice of Roy DeMeo, his links with Gambino mafia took root. They used him to eliminate any threat to their interests. Kuklinski gained the respect of the streets as a highly efficient and ruthless killer.

In the following years, he executed fatal attacks to his victims. Five of his murders were profiled by the police and led to his arrest. In 1980, he killed George Malliband. The following year he took his second victim Louis Masgay. Both bodies had bullet wounds and were stuffed in ice to conceal evidence. Kuklinski then turned to his own ring members he considered a sellout. His first gang member Gary Smith became the third victim. His body was stuffed under a motel bed. It was discovered in 1982. The same happened to Daniel Deppner in the same year. He later claimed to have killed Paul Hoffman, but the body was never located.

The ensuing investigation took the police over six years. Kuklinski, now known as the Iceman, was on the run. After several leads, the police managed to close on him. He was approached by an undercover investigator who offered him a hit job. Working together with the policeman, they tracked an imaginary victim. When the police were certain of his identity and history, Kuklinski was arrested. The 1986 arrest closed a six-year goose chase investigation. Two years later in 1988, he was committed to two life terms in jail.

Kuklinski was married and divorced twice. His first marriage was to Linda. The formerly married Linda was nine years his senior and had two children. The two divorced a few years later.

In 1961, he got married to Barbara. With her, he became a father to three children. Due to his abusive nature, the couple divorced after a while.

In the local church community, Kuklinski was a devout Catholic. He never missed mass and served as a committed altar boy.

Kuklinski died in prison on March 5, 2006, in New Jersey. He was almost 71 years. His death was caused by complications from Kawasaki disease. This is an inflammation of the blood vessels leading to heart attacks.

Violence begets violence. This is evident in the life of Kuklinski. His parents suffered abuse in their childhood. The same cycle of violence was passed on to the children. With no help forthcoming, Kuklinski sought to prove his worth by killing others. His deranged personality was convinced that greatness and life satisfaction came through hurting others.

His life story has formed the basis of three television documentaries.