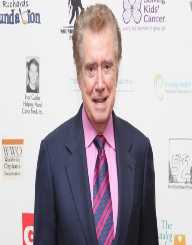 Regis Philbin is a widely known TV personality in America who holds the Guinness World Record for spending the most time in front of a television camera. He is also famous for his talk show of 1988, which became ‘Live! With Regis and Kathie Lee' in 2001. Additionally, he hosted the first season of ‘America’s Got Talent’ and shows such as, ‘Who Wants to Be a Millionaire’ and ‘Million Dollar Password.'

Regis Philbin is the son of Francis Philbin and Filomena born in the Bronx, New York City on August 25, 1931. Philbin enrolled to Our Lady of Solace grammar school in the Bronx. Later in 1949 he graduated from Cardinal Hayes High School in the Bronx and graduated with a sociology degree from the University of Notre Dame in 1953.

After his graduation, he served as a supply officer in the United States Navy and then served a few behind-the-scenes jobs in television and radio. In the 1950s Philbin moved into the broadcasting arena and appeared at a page at ‘The Tonight Show.' During this period, he wrote for Los Angeles talk show host named Tom Duggan and filled for him one night when he didn't show up.

Later in 1957, Regis Philbin left his job as an assistant news editor to work at Baxter Ward at KCOP in Los Angeles, New York. On his arrival, he had his first talk show titled 'The Regis Philbin Show' on KOGO-TV which he engaged his audience in discussions about daily events and his life. Additionally, in 1962 he served as an announcer on The Tonight Show.

Notably, Westinghouse Broadcasting picked up his talk show for national syndication in the late night time slot in 1964. However, the show failed to attract many stations, and Westinghouse replaced him with Merv Griffin. Philbin had his first TV exposure in 1967, on The Joey Bishop Show where he appeared as Joey Bishop’s sidekick on the show.

In 1981, Regis Philbin co-hosted alongside Mary Hart, a national morning variety series for NBC show that lasted 18 weeks. After the departure of Garvey in 1982, Philbin hosted ‘The Morning Show’ on WABC-TV. A year later he co-hosted with Kathie Lee Johnson and improved the ratings significantly. The show changed to be known as ‘Live! With Regis and Kathie Lee’, in September 1988. Due to its success, it replaced 'A.M. Los Angeles' after its cancellation in 1991 and aired on all of the ABC stations except WLS in Chicago.

In the 1980s, Regis Philbin worked on the Lifetime television network, where he hosted Lifestyles with Regis Philbin. In 1999, he hosted an ABC game show titled, ‘Who Wants to Be a Millionaire.' The show was canceled in 2002 due to poor ratings. Philbin got back on the air with the show in 2004, with a new title, ‘Who Wants to Be a Super Millionaire.'

Boldly, he also appeared as a celebrity contestant in 11 episodes of ‘Who Wants to Be a Millionaire,’ which started on August 9, 2009, and guest hosted a week of episodes that aired in November 2009. Remarkably, Philbin set a Guinness World Record on his August 20, 2004, live show for Most Hours on Camera.

In November 2005, Regis Philbin hosted the ABC’s revival of ‘This Is Your Life.' However, in August 2006, his contract for the show lapsed, and he declined to renew it. During the summer of 2006, Philbin hosted season one of NBC talent search show titled, ‘America’s Got Talent,' and also participated in both Live with Regis and Kelly and AGT. However, due to his health problems, Jerry Springer replaced him in 2007.

In 2008, he renewed his contract with ABC until 2011. Later in 2015, he guest hosted two episodes of ‘The Late Show’ and appeared on ‘Today with Kathie Lee and Hoda.’ In 2016, he voiced Easter Bunny in the Episode: ‘Uncle Easter’ of an animated film titled, ‘Uncle Grandpa’ and played in ‘Tony Bennett Celebrates 90: The Best Is Yet to come.’ In 2017 Philbin appeared as a guest co-host in ‘Home and Family’ film.

Triumphantly, in 2001, Regis Philbin won a Daytime Host Award for Outstanding Talk Show Host followed by a TV Guild Award for Personality of the Year in 2002. In 2008, he earned a Lifetime Achievement Award at the Daytime Emmy Awards followed by a Golden Mike's Broadcast Legend Award in 2010.

In 2011, Philbin won a Daytime Emmy Award for Outstanding Talk Show Host n ‘Live with Regis and Kelly’, and on May 9, 2015, the Trine University awarded him with an honorary Doctor of Humane Letters degree.

In 1957 Regis Philbin married Catherine Faylen, and after they divorced in 1968, he married Joy Philbin on March 1, 1970. Philbin has three daughters named JJ, Joanna and Amy and a son Daniel. In 1993 Philbin had an angioplasty. Later on March 14, 2007, he underwent triple bypass surgery at Weill Cornell Medical Centre which succeeded. On December 1, 2009, Philbin had a hip-replacement surgery.