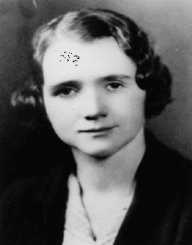 Rachel Carson was born on May 27, 1907, in Springdale, Pennsylvania, USA. Her parents were Robert Warden Carson and Maria (McLean) Frazier. The family lived on a farm, and Rachel was always surrounded by nature which helped to encourage Rachel’s lifelong interest in ecology and biology.

Rachel Carson attended the Pennsylvania College for Women. There, she studied writing and several sciences. While she studied there, she wrote for the school’s newspaper. She graduated from the college in 1929. Soon after, she began to work at the University of Maryland. At the same time, she attended Johns Hopkins University, where she earned her Master’s Degree in zoology in 1932.

Aside from teaching, Carson’s first job in the science field began when she worked for the US Bureau of Fisheries. She wrote and narrated scripts for the bureau’s radio program. She first worked there as a temporary position, but she was hired to a permanent position in 1936.

While working at the Bureau, Rachel Carson learned about a harmful pesticide, DDT which later became the focus of her studies. In 1949, she was promoted to the Editor-in-Chief of the bureau. However, she quit the job two years later. Afterwards, she focused on research and writing.

Rachel Carson’s first paper came out in 1937. It was a small article writing for the Atlantic Magazine. Her piece was titled Undersea. In the article, she wrote about marine life.

Between her trilogy and her last novel, Rachel Carson spent many years writing scientific articles for various magazines.

In 1962, Rachel Carson published Silent Spring, a book about how pesticides affected the environment in the early 20th century. This book led to more scientists talking about DDT, as well as other popular pesticides. It was because of this book that some pesticides became banned in the USA. This book was the last one she would ever publish in her lifetime. During her lifetime, critics of the book would claim Carson was a communist for her environmental beliefs. It was not until after her death that her work was used to help the environment majorly.

Rachel’s last book, The Sense of Wonder, was published after her death.

In 1951, the same year the book was published, The Sea Around Us earned the US National Book Award.

After her death, Jimmy Carter awarded Rachel Carson the Presidential Medal of Freedom for her work in both science and literature.

Rachel Carson never married or had any children of her own. She did adopt her great-nephew, Roger Christie after his biological mother died. Rachel also took care of her mother and two of her nieces for a short time while she was working at the US Bureau of Fisheries. She never adopted her nieces, though.

Rachel Carson died on April 14, 1964, in Silver Spring, Maryland due to a heart attack. Before the attack, she had suffered from illness. She was 56 years old.

During her lifetime, Rachel Carson studied the adverse effects of DDT. This pesticide had been used since the later 1800s. After her death, in 1972, the pesticide was banned from use in the USA (even though it was still made in the country and sold to other countries). It was in part from her work that the ban was accomplished, leading to a safer environment for plants, animals, and humans.

A documentary was made about Rachel Carson, Roger Christie, and other scientists about the struggles of trying to make a positive ecological change. This was titled, The Power of One Voice: A 50-Year Perspective on the Life of Rachel Carson.