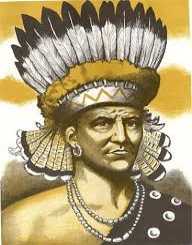 The traditional paramount ruled over 30 tribes in Jamestown in 1607. Before clashing with the colonist, he traded with them. He was the elder brother of Opchanacanough, the man responsible for major attacks on the English between 1922 and 1644.

Powhatan was born between 1540 and 1550 in Wahunsenacawh. Even though there is scarce information about his early life, he grew up in a matrilineal society. He inherited his rights of becoming chief, from his mother who is believed to be from the royal family.

Powhatan combined diplomacy and force to rise into power. He inherited a total of six tribes before assembling 30 more tribes to form the Powhatan Confederacy. His empire consisted of more than 15,000 people. Each tribe had a paramount chief who reported to Powhatan.

Having more than 30 tribes under him helped expand his territories. All these tribes pledged their loyalty to Powhatan hence fighting by his side. Throughout his leadership, none of the tribe showed rebelled against him, on the contrary, they all paid tribute to him.

Powhatan controlled an area of about six thousand square miles, an area called Tenakomakah or Tsenacommacah. This area is currently southern Maryland, Tidewater Virginia, and Chesapeake Bay's eastern shore. Through his position as a chief, he assembled vast wealth.  His wealth and power enabled him marry many/

It is not clear the exact date Powhatan took over power. Various historians, however, indicate that he started his rule around 1540. During the formation of Jamestown settlement in 1607, he was in control.  One of his noble act was sending an ambassador to try and negotiate a peace deal with the ambassador.

In addition to forging for peace with the colonist, he supplied food and water to them. Despite providing them with food and water, the colonist continued to encroach into Powhatan's land. They wanted to make Powhatan a subject of English.

Due to the determination by the English to make him their subject, he moved to Orapax, a new capital. It indicated his unwillingness to become the subject of the English colony. Also marked the beginning of a new era for Powhatan.

As the English increased their influence in Powhatan's territory, tension continued to grow. In one instance, the chief invited the colonies to Orapax, his new settlement in what many believed was a trading deal.

During the meeting, he took the English by surprise and attacked them, killing most of them. He later ordered that colonist living in Jamestown be stricken. Trade between the English colonist and Powhatan came to an end.

Until the arrival of new leadership in 1610, the colonist had a difficult time living among the Powhatan tribes. A new administration weakened the tribes, and the colonist began enforcing a more is a powerful tactic against them.

Pocahontas later drew the attention of John Rolfe after changing her religion to Christianity. The marriage of the two brought calm between the settlers and the native tribes. The peace persisted for a while even after the chief's death.