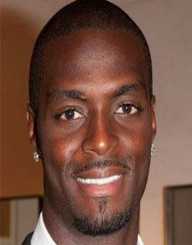 American professional footballer, Plaxico Antonio Burress, was born on August 12, 1977, in Norfolk, Virginia, United States of America. His talent as a born footballer was quite visible during the early years of his high school days.

While studying in the Green Run High School, he was selected by the Parade Magazine in their probable All-America Football team. Besides, his prowess as a blessed footballer was admired profusely since his high school days. He joined the Michigan State University upon completion of his high school studies and started playing football for the university team.

Plaxico Burress had an astonishingly successful freshman year in the University. While he established a new record of most passes in a single season, the other statistics related to the excellence of his football skills nearly made him reach the top position.

His superlative exploits on the football field led his team beat the University of Florida in the 2000 Citrus Bowl.

In the National Football League draft of 2000, Plaxico Burress was picked eighth overall by the Pittsburgh Steelers. Out of his five years with the Steelers, he played only 12 games in the first season as he required surgery to fix his wrist injury. He played the next four seasons with full force breaking records and gathering new statistics.

The 2001 and 2002 season stood out among these four seasons regarding the value delivered by Plaxico to the cause of his team. In 2004, he became a free agent as Steelers did not renew his contract. Over the years he developed a bad reputation of being undisciplined, turning up late for the team meetings and skipping practice sessions and coaching camps without any prior intimation.

The prospect of finding and joining a new team was hindered by such a poor reputation. However, turning the tide in his favor, he clinched a deal with the New York Giants. Making a deadly combination with Amani Toomer and Eli Manning, the two other players of New York Giants, Plaxico Burress had a very successful and impressive first season with the Giants.

The 2008 season was the most memorable for Plaxico as the powerful combination of him and Eli Manning helped defeat the still undefeated New England Patriots in Super Bowl XLII. His game-winning touchdown pass in the dying moments of the game made the score 17-14 in favor of the Giants.

During the 2008-09 seasons, Plaxico was suspended for one game for flouting team rules in September 2008. On November 28, 2008, while going to a Manhattan Night Club accompanied by his teammate Antonio Pierce, he accidentally shot himself on his thigh by an illegal handgun he was carrying with him.

Plaxico Burress was later arrested on the charge of illegal possession of a weapon and was released on bail after furnishing a $100000 bail bond. He was subsequently given a 20-month jail sentence on charges framed under the criminal possession of weapons. New York Giants also suspended him for the rest of the season.

In June 2011, Plaxico was released from the jail. In what could be termed as the most stunning comeback, he reinstated himself in the NFL signing with the New York Jets for the 2011 season.

Plaxico Burress was hailed as the Comeback Player of the Year by the Sporting News though many others felt he had not utilized his full potential. In November 2012, he rejoined Pittsburgh Steelers, from where he had started his NFL career.

He suffered a torn rotator cuff injury during the 2013 season and was subsequently placed on the official list of reserved players of the Steelers with an injury. He remained out of action for the entire 2013 season. In 2014, he joined the Sports Net New York as their football analyst effectively ending his playing career. He was appointed as a trainee coach by the Arizona Cardinals on July 22, 2017.

Plaxico Burress married Tiffany Glenn in July 2005. They have a son and a daughter together. He presently resides in Totowa, New Jersey.

He co-authored a book titled ‘Giant: The Road to the Super Bowl’ narrating his experiences about the Super Bowl. He participated in a reality TV Show called ‘Celebrity Wife Swap’ on July 29, 2014.