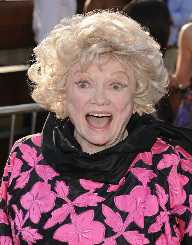 Phyllis Diller was born 17th July 1917, to Perry and Frances Driver. She was born in Ohio, United States, in a town called Lima. She was an only child, and her parents were older than the accepted norm for the time, and quite devoid of displaying emotions. Because they were older, Diller was subjected to more funerals than other children her age, which gave her an early appreciation of life.

She studied at Lima Central High School. From there, she went to the Sherwood Music Conservatory at Columbia College in Chicago, where she studied piano for three years. Diller decided against a career in music, and transferred to Bluffton College, to study literature, history, psychology, and philosophy.

It was whilst she was at Bluffton College that she met her first husband, Sherwood Diller. They got married in 1939, which saw Diller drop out of college to become a housewife and raise their children.

Phyllis Diller had her children between 1940 and 1950. In 1952, Phyllis Diller had several work roles. She was working in broadcasting at KROW Radio in Oakland, California, and she was a copywriter for KSFO Radio in San Francisco. Phyllis Diller was also working in television – she did music reviews for a show called Pop Club hosted by Don Sherwood, and she filmed quite a few 15-minute segments for a television series called Phyllis Dillis, the Homely Friendmaker. Phyllis Diller debuted as a stand-up comedian in March 1955, at The Purple Onion, a club in San Francisco. She was 37 years of age at the time and had the full support of her husband. She was originally booked for two weeks, but the show was so successful, she ended up performing there for 89 weeks. The irony was, as Phyllis Diller became more popular as a comedian, her husband’s business career hit the rocks and failed.

Phyllis Diller wrote her own material and kept them all in a filing cabinet.

National television success came for Diller after she made several appearances on the Jack PaarTonight Show, which then led to an appearance on The Ed Sullivan Show. She continued, meanwhile, to perform her stand-up comedy routines throughout the United States.

Phyllis Diller then recorded several comedy albums. The first was in 1959, and they continued throughout the 1960s.

During this period, Phyllis Diller started acting in movies and made several with Bob Hope. Although the critics mostly canned the movies, they were box office successes. Diller joined Hope in 1966, traveling to Vietnam during the war to entertain the military personnel posted over there.

Upon her return, Phyllis Diller continued to act and perform on television and in films, for the next several decades.

Phyllis Diller also appeared in 48 television shows. Some were series such as Chips, The Love Boat, and Boston Legal. Others were her own variety shows.

She officially retired from stand-up performances in 2002. Diller did, though, continue to make ad-hoc appearances such as The Tonight Show with Jay Leno in January 2007, and a cameo appearance on Roseanne Barr’s reality television show in 2011.

Phyllis Diller was also an accomplished author, musician, and artist.

She published several books, including Phyllis Diller’s Housekeeping Hints, Phyllis Diller’s Marriage Manual, and The Complete Mother. Her autobiography was released in 2006. It was co-written with Richard Buskin, and titled, Like a Lampshade in a Whorehouse – My Life in Comedy.

Phyllis Diller had also kept up her piano playing throughout the years, and from 1971 to 1981, unbeknownst to many, she performed as a piano soloist with symphony orchestras across the U.S. Her stage name was Dame IllyaDillya.

She began her artworks in 1963 and painted throughout the 1970s. Phyllis Diller held several art events, beginning in 2003, where she displayed and sold her artwork, stage costumes, and jewelry.

Her first marriage was to Sherwood Diller in 1939. The couple had six children together, although one of the children only survived two weeks. The couple divorced in 1965.

Phyllis Diller's second marriage was to Warde Donovan in 1965. Donovan was an actor. The couple divorced in 1975.

Phyllis Diller's next serious relationship was with Robert Hastings. They were together from 1985 until 1996 when Hastings died.

Phyllis Diller led the way for female comedians. She had none before her to model herself on and learned as she went along. She did, however, inspire many women afterward, to follow her into the world of stand-up comedy.

In 2003, Phyllis Diller gave some of her most famous costumes, along with her “gag file,” containing over 50,000 jokes, to the National Museum of American History.