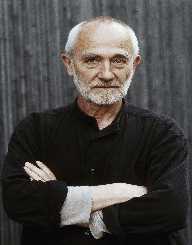 Architect Peter Zumthor was born on the 26 April 1943 in Basel, Switzerland.

Initially, Peter Zumthor followed his father’s profession and trained to be a cabinet maker (1958-1962). He then studied at Kunstgewerbeschule, Vorkurs, and Fachklasse before studying design at the Pratt Institute of New York.

In the late 1960s, Peter Zumthor worked for the Department for the Preservation of Monuments in Switzerland as a consultant and architectural analyst as well as a restoration expert. He started his practice in Haldenstein, Switzerland in 1979.

While still maintaining his practice in Switzerland, Peter Zumthor has been a professor at the Academy of Architecture, Universitá della Svizzera Italiana, Mendrisio since 1996. He has been a visiting professor at the University of Southern California Institute of Architecture and SCI-ARC in Los Angeles (1988), Technische Universität, Munich, Germany (1989)  and the Graduate School of Design, Harvard University (1999).

Some of his buildings include Brother Klaus Field Chapel, Kolumba Art Museum, Swiss Pavillion Expo Hannover and Therme Bath building at Vals. Zumthor is the author of the book, Thinking Architecture (1998).

In 2009, Peter Zumthor was awarded the Pritzker Laureate prize which was presented to him at a ceremony in Buenos Aires, Argentina. He has won numerous other architectural awards including the Praemium Imperiale (2008) from the Japan Art Association, the Carlsberg Architecture Prize, Denmark (1998), the Miles van der Rohe Award for European Architecture (1999), the Thomas Jefferson Foundation Medal in Architecture (2006) and the American Academy of Arts and Letters Arnold W. Brunner Memorial Prize in Architecture (2008).

Peter Zumthor is married to Annalisa Zumthor-Cuorad, and they have three children, Anna, Peter, and Jonn.