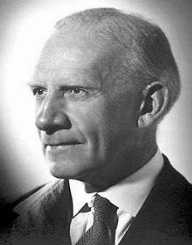 Paul Hermann Müller was a Swiss chemist and recipient of the Nobel Prize in Physiology or Medicine in 1948. The man who was born at the beginning of 1899 grew up to be a great chemist in his life. He was awarded the Nobel Prize for his contributions towards insecticidal qualities. His discovery of dichloro diphenyl trichloroethane (DDT) also contributed to the award.

He is, therefore, best remembered for helping in reducing the occurrence of Malaria in some countries through DDT. Throughout his career, Paul worked at J. R. Geigy firm that produced dyes.

Paul Hermann Müller was born on January 12th, 1899. His place of birth was in Olten, Solothurn in Switzerland. He was the firstborn of Gottlieb Muller and Fanny Leopold. His father was among the officials of the Swiss Federal Railways. Paul had three siblings.

His father was transferred to Basel when Paul was 5. He moved there along with his family. This is where Paul attained his elementary education. He schooled in the Freie Evangelische Volsschule before he joined high school. By 1919, Paul Hermann Müllerl had attained his diploma. In the same year, he enrolled in the Basel University. From 1922, he concentrated in inorganic chemistry. In 1925, Paul attained his Ph.D.

In 1925, soon after attaining his Ph.D., Paul Hermann Müller joined J. R. Geigy firm. The firm dealt with the production of dyes. He worked in the firm’s dye division as a research chemist. This is where he spent the rest of his career.

He commenced his research on insecticides in 1935. His main focus was in those that had when came in contact with insects affected them. By 1937, his study led to a new method of making insecticides. This was by using synthetic based compounds of rhodanide and cyanate. He also came up with Garmin one, a seed disinfectant that was free from mercury.

In 1939, Paul Hermann Müller came up with dichloro diphenyl trichloroethane (DDT). Later in 1943, it was tested by the Swiss and U.S governments. The results proved that DDT was quite a success. It was then put in use in Naples in Italy that same year with great success. It helped put an end to a great typhus epidemic. However, it was later discovered that DDT had its negative impacts on the life of humans and individuals. Since then it was used sparingly. In 1949, his paper on DDT was published with the title Dichlorodiphenyläthan und neuere Insektizide.

In his later years, Paul was appointed as the director of the pesticide division of J. R. Geigy. Meanwhile, he also served as the deputy chairman of the firm and retired in 1961. After his retirement, Paul conducted more researchers from his laboratory in Oberswil.

Apart from the 1948 Nobel Prize in Physiology or Medicine, Bother also received other honors. The University of Thessalonica recognized him for his DDT contributions. He was presented with an honorary doctorate from the university.

In 1927, Paul Hermann Müller wedded his lovely wife, Friedel Ruegsegger. The couple lived happily after that and had three children: Heinrich,  Niklaus, and Margaretha.

The life of Paul Hermann Müller came to an end on October 12th, 1965. He died at the age of 66 in Basel, Switzerland.