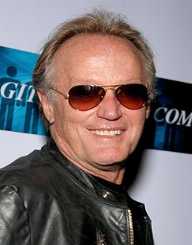 Peter Fonda is an American actor whose household is involved in the acting industry. Despite coming from a well-known lineage, Fonda worked his way through his roles which landed him his acting roles.

Fonda married 3 women in his life. His first marriage was to Susan Brewer in 1961 which brought forth two children: Justin and Bridget. His marriage to Brewer lasted for 11 years until their separation in 1972. 3 years later in 1975, he married Portia Rebecca Crockett or “Becky McGuane” but their marriage ultimately ended in divorce in 2011. The same year in 2011, he got married for the third time in Hawaii and this time to Margaret “Parky” De Vogelaere.

Born in New York City on February 23, 1940, as Peter Seymour Fonda, his father was the actor Henry Fonda and the younger brother of actress Jane Fonda. His mother, Frances Seymour Brokaw, committed suicide when he was 11 years old.

As a child, he was a remarkable student in school and managed to enter the University of Omaha despite not finishing high school leaving his New York home in favor of Nebraska. While he was studying in university, he landed a role in a local production of Harvey which let him experience acting first hand.

With a new found taste for acting, Fonda moved back to New York to pursue his passion finally making his debut at the age of 21 on Broadway in a local production of Blood, Sweat, and Stanley Poole. A few years later, he made his debut in Hollywood by starring alongside Sandra Dee in the 1963 film Tammy and the Doctor.

By the 1960s, he became a staple lead man on romantic films but soon rubbed off the persona when he took on the role notorious gang leader Heavenly Blues in The Wild Angels released in 1966.

His commercial breakthrough came in the role of Wyatt "Captain America" Earp in the 1969 film Easy Rider which he starred alongside Dennis Hopper and Jack Nicholson. The film turned out to be a hit and grossed $19 million at the box office which also became an icon for the era with a biker gang and their pot-smoking adventures. For his role as Earp, he was nominated for an Academy Award for Best Screenplay. The same year Easy Rider was released, Fonda relocated to Montana from Los Angeles. However, the rest of the films he did after Easy Rider proved to be hard to live up to so his acting career was duly overshadowed from the 1980s to the 1990s.

He made a comeback performance with the 1997 drama entitled Ulee's Gold. His acting scored him a nomination at the Oscars for Best Actor for his portrayal of the lead character. Another role that showcased his talents is in the 1999 television drama entitled The Passion of Ayn Rand which earned him the Best Supporting Actor at the Golden Globe Award.