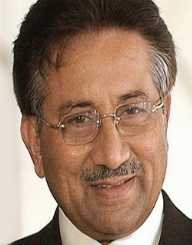 Pervez Musharraf is a Pakistani politician and retired military officer. Born on August 11, 1943, he was the tenth president of Pakistan, serving from 2001 until he resigned in 2008. Musharraf entered the Pakistan Army in 1964, rising to the rank of major general in the 1990s.

In October 1998, Prime Minister, Nawaz Sharif, promoted him to a four-star general and therefore became the head of the army. Musharraf rose to power after a military coup d’état in 1999.

As the head of the new military government, Musharraf was also the Chairman of the Joint Chiefs and Chief of the Army Staff. In 2001, he stepped down as the chairman of the joint chiefs. On June 20, 2001, he became the President of Pakistan and won a five-year mandate after a referendum on May 1, 2002. He resigned from power in 2008, after threats of the impeachment.

Pervez Musharraf was born on August 11, 1943, in Delhi, British India to Begum Zarin Musharraf and Syed Musharraf Uddin. His father was a member of the Pakistani Foreign Service, and accountant of the foreign office of the British India government and his mother worked for the United Nations. His father moved the family from Old Delhi, India to Pakistan in 1947 after the Indo-Pakistan partition.

He was raised in Karachi and Istanbul, Turkey where his father was a diplomat. He received education St. Patrick’s School in Karachi and graduated in 1958. He then continued at the Forman Christian College in Lahore, where he studied mathematics. He was fluent in Turkish after staying in Turkey for seven years with his family.

Pervez Musharraf entered the Pakistan Military Academy in 1961, and three years later was commissioned to an artillery regiment. After his commission, he joined the Special Service Group.

He continued his military education at the Command and Staff College and the National Defense College in Pakistan. In 1965, he faced charges for taking unauthorized leave and set to face trial at the martial-court. Luckily for him, the Indo-Pakistani War of 1965 interrupted the process. At the rank of lieutenant, Musharraf saw action in at war. Musharraf attained the rank of a second lieutenant as Pakistan continued to battle with India.

Pervez Musharraf was commanding an artillery brigade in the 1980s and 1990s, he was promoted to major general and assigned an infantry division and later commanded an elite strike force. He later received an award for gallantry and was promoted to captain. He also served as deputy military secretary and director general of military operations. As he pursued his military profession, he was also making inroads in the political arena.

In 1998, the prime minister, Nawaz Sharif promoted him to a four-star general, hence, became the head armed forces. In 1999, war broke up once again in what became known as the Kargil Conflict around the borders of Pakistan and India.

The happenings in the war became a great embarrassment for the Pakistan government. Prime Minister Sharif claimed Musharraf was solely responsible for the Kargil debacle while Musharraf also blamed Sharif. Sharif unsuccessfully attempted to remove Musharraf from the army’s leadership. The army generals retaliated forcefully by seizing power in a coup d’état, removing Sharif from power.

He was since placed under strict house arrest and later trial in Adiala Prison, Saudi Arabia. Pervez Musharraf was made the head of the military government and maintained a position as the Chairman of the Joint Chiefs and the Chief of the Army Staff.

He stepped down from the position of Chairman of the Joint Chiefs in 2001. He became the president of Pakistan in 2001 after Rafiq Tarar left office. After a controversial referendum on May 1, 2002, he earned five years term of presidency.

Assuming office in 2001 as the president, Pervez Musharraf appointed Shaukat Aziz as Prime minister. Musharraf directed policies against terrorism and cooperated with American in the war on terror. As a president, he managed to survive some assassination attempts.

He was a proponent of economic liberalization and the ban on trade unions. During his tenure, the GDP (Gross domestic product) rose to 50%, while domestic savings declined, rising the gap in economic inequality. In 2002, he restored the heavily amended constitution amidst the Legal Framework. He accepted verdicts of the Supreme Court making him the first military president to accept the rulings of the Court.

Pervez Musharraf held a free and fair election in his vision to return the democracy in the country. Early 2008, Musharraf position weakened, and that followed his resignation to escape any impeachment process. After resigning from office, he left for London in a self-imposed exile. While in London, he engaged in several legal battles.

The country’s high courts issued warrants for his arrest alongside Aziz for their suspected involvement in the assassinations of Bugti and Benazir. He sought to come back to power by contesting in the 2013 general election but was disqualified by the court.