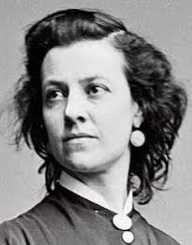 Pauline Cushman was born on June 10th, in 1833. She was a celebrated American actress. Besides this profession, she worked as a spy. Cushman was a spy at a time when the American Civil War was going on. As a result of her spy career, she was credited for being a highly successful Union Army’s spy.

Pauline Cushman was born on June 10th, in 1833. At the time of her birth, she took the name Harriet Wood. Her place of birth was in New Orleans, Louisiana. She later adopted the name Pauline Cushman as her stage name.

Young Cushman grew up in Grand Rapids, Michigan. Cushman’s first on-stage appearance came in 1862. After this, she migrated to New York. Here, she managed to change her name from Harriet Wood and adopted the name, Pauline Cushman.

Due to her exceptional performance, Pauline Cushman was hired by pro-Confederate guys to honor President Jefferson Davis with her performance. She agreed to do this in the name of working as a spy for the Union.

Accordingly, by working with rebel military superiors, Cushman was in a position to spy for the Union. She helped them in unveiling possible military plans. To do this, she had to hide military plan drawings in her shoes.

Nevertheless, her strategies failed twice in 1864. Consequently, she was tried by the court and found guilty. Cushman was to face a hanging sentence as a result. However, she pretended to be ill, and thus the Confederates postponed her execution.

Soon, Union troops invaded the area. This helped Cushman to evade the hanging sentence. Due to Pauline Cushman's heroic acts as a spy, she earned herself a promotion to the rank of a brevet major. After that, President Abraham Lincoln promoted her further to become an honorary major.

After the war came to an end, Cushman utilized her celebrity to her advantage. She performed in several stages in San Francisco and Boston. Her biography titled The Life of Pauline Cushman: The celebrated Union Spy and Scout was released in 1865. One of her friends called Ferdinand Sarmiento published the work.

Pauline Cushman wedded four times during her lifetime. Her first marriage was to Jere Fryer. She then married to Charles C. Dickinson. Her third marriage was to Scott Gebbie. After that, she closed the chapter with August Fichtner. In all her marriages, she had three children. One of her children was the one that she had adopted.

Pauline Cushman passed away on December 2nd, in 1893. She was 60 years old at the time of her demise.