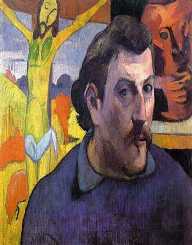 Eugène Henri Paul Gauguin was a French post-Impressionist artist. He was also a painter, sculptor, printmaker, ceramist, and writer. A leading French Artist of the symbolist art movement, his works were not appreciated and recognized until after his death.

Paul Gauguin was born on June 7, 1848, in Paris, France. His father, Clovis Gauguin was a liberal journalist. His mother, Alina Maria Chazal was from a reputed family. His father had to flee Paris when the newspaper, he worked with was suppressed by the French Authorities. His mother had some past connection with a wealthy and influential family settled in Peru, South America. Thus, his family moved to Peru during the crisis. Unfortunately, his father died of a heart attack en route. Alina, Paul’s mother, reached Peru widowed with eighteen-month-old Paul and his two and a half-year-old sister.

Alina’s paternal granduncle was an influential person of Lima, the capital city of Peru. His son-in-law became President of Peru shortly afterwards. Paul Gauguin was raised in this household of Lima with a luxurious and privileged upbringing attended by nursemaids and servants. The feudal lifestyle left a lasting impression on young Paul’s mind, and the soul-stirring experience remained vividly etched in his memory for the rest of his life. In 1854, there was a civilian conflict in Peru. The conflict divested the political powers abruptly enjoyed by his mentor family so far. Thus, Paul’s wonderful childhood in the tropical paradise concluded on a bitter note.

Alina returned to Paris along with her children. She left Paul with his paternal grandfather, Guillaume Gauguin in Orleans and settled herself in Paris working as a dress-maker. Paul attended a few local schools initially before being sent to the prestigious Catholic boarding school Petit Séminaire de La Chapelle-Saint-Mesmin. After attending the school for three years, Paul entered the Loriol Institute in Paris. It was a naval preparatory school. He returned to Orleans to complete his final year at the Lycée Jeanne D'Arc.

At the age of 17, Paul Gauguin signed as a pilot’s assistant in the Merchant Marine. For the next three years, he sailed around the world. He joined the French Navy and served there for two years. During his stint with the French Navy, his mother died. He learnt the news late when a letter from his elder sister reached him while he was posted in India. In 1871, he returned to Paris and with the help of the legal guardian and family friend, he secured a job as a stockbroker in Paris Bourse. The 23-year-old Paul successfully conducted the business for the next eleven years. He was earning about 30000 Francs a year from his stockbroking business in 1879 and also almost the same amount from his dealings in the art market.

However, in 1882 Paris Stock Market crashed and his income from stockbroking declined sharply. After realizing the uncertainty of the business, Paul Gauguin decided to pursue painting as his full-time career. As he was keen to continue painting as his professional career, he formed a friendship with reputed artist Camille Pissarro. Pissarro, in turn, introduced him to other artists and helped him exhibit his paintings in Impressionist exhibitions held in 1881 and 1882.

In 1883, Gauguin moved to Rouen, France as a cost-cutting exercise. The move did not succeed as expected and his Danish wife went to Copenhagen, Denmark in 1884. Gauguin followed suit shortly. But the problem persisted, and his efforts in making a decent livelihood in Copenhagen failed. Consequently, his wife had to don the role of primary bread-earner of the family.

In June 1885, Paul Gauguin returned to Paris along with his six-year-old son Clovis. His other children remained in Copenhagen with his wife. With great difficulty and after a few years of struggle, Gauguin was able to re-enter the French Art Market. In 1887, he went to Martinique accompanied by his friend and fellow artist Charles Laval. There he prepared many paintings. The eighth and last Impressionist exhibition in May 1886, exhibited his nineteen paintings and a wood relief.

One of his most famous paintings ‘Vision of the Sermon’ was created in 1888. The painting showed the biblical tale of Jacob wrestling with the Angel using broad planes of bold colours, clear outlines, and simplified forms. Along the same period, he came up with another remarkable painting titled ‘Old Women of Arles (Mistral).’ In the following year, he came up with his masterpiece work ‘The Yellow Christ.’ It was a portrayal of Crucifixion of Jesus Christ. The use of bold lines and bright colors such as red and green in the background as against the yellow of Christ is an example of quintessential cloisonnist work of Paul Gauguin and showed the influence of folk and Japanese art in his paintings.

Paul Gauguin went to Tahiti, an exotic African location to relieve himself from the monotony of European Society and to create more paintings in a carefree environment. He immersed in the authentic aspects of the local culture and created some paintings with Tahitian titles. ‘Manao tupapau (The Spirit of the Dead Watching)’ and ‘Fatata Te Miti (Near the Sea)’ are two such paintings where he used Oceanic iconography, and portrayed idyllic landscapes and suggestive spiritual settings. He returned to France in 1893 and 1894; he came up with a painting called ‘Day of the God’ in which he depicted Tahitian Religion.

In 1897, Paul Gauguin painted his most acclaimed piece of painting ‘Where Do We Come From? What Are We? Where Are We Going?’ Human beings tend to seek spiritual answers about their existential questions. The iconic painting dealt with the theme with his post-impressionist style of work of thick brush strokes and bold colours.

In 1873, Paul Gauguin married a Danish woman Mette-Sophie Gad. They had five children. However, the marriage was not successful as he was unable to provide any financial and moral support for his family. He had extra-marital relationships with several other women and fathered several children out of these relations.

He contracted syphilis and was an alcoholic. He once attempted suicide and was a patient with recurrent depression. He died at the age of 54 due to morphine overdose and heart attack on May 8, 1903, in Atuona, Hiva Oa, Marquesas Islands, French Polynesia.