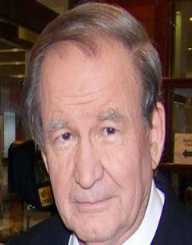 Patrick Joseph Buchanan was born on November 2, 1938. He is an American politician, political commentator, and columnist. He was a senior advisor to the United States Presidents Richard Nixon, Ronald Reagan, and Gerald Ford. He was an original host of the ‘Crossfire’ on CNN. He is currently seventy nine years old.

Patrick Joseph Buchanan was born on November 2, 1938, in Washington DC in the United States of America. He was born to William Baldwin Buchanan and Catherine Elizabeth Buchanan. He was brought up alongside eight siblings, Brian, Henry, Thomas, James, John, Angela Marie, and Kathleen Theresa. He was raised in a Catholic household.

In 1961, Pat Buchanan started working as an editorial writer for the ‘St. Louis Globe Democrat’. He later became a member of the Young Americans for Freedom where he wrote press releases for the institution. In 1965, he became an executive assistant for the firm of Nixon, Mudge, Rose, Guthrie, Alexander, and Mitchell in New York City. In 1966, he was appointed as an advisor for Nixon’s Presidential Campaign. His main work was to research things to use against the opposing party or parties.

In 1966 and 1968, he travelled with Nixon to all his campaigns. In 1969, after Nixon became President, he was appointed as Nixon’s advisor and speechwriter in the White House. In 1974, after the resignation of Nixon, he became a special assistant to President Gerald Ford. He later became a political commentator and broadcast host. He co-hosted a show with Tim Braden titled ‘Buchanan-Braden Program.’ He later became famous as a host in shows such as CNN’s ‘Crossfire,’ ‘The Capital Gang’ and ‘The Mc Laughlin Group.’

In 1985, Pat Buchanan was appointed White House Communications Director, a post he held up to 1987. After he left the White House, he went back to hosting ‘Crossfire.’ In 1992, he helped Bush campaign for the Presidency, but at first, he was opposed to Bush’s ideologies. In 1996, he also participated in the Presidential campaigns. In 2000, he ran for the Presidential seat under the Buchanan Reform Party but ended up fourth.

In 2004, he identified himself as a Republican after initially leaving the Republican Party. In the same year, he also endorsed George Bush’s re-election. In 2012, he endorsed Republican Presidential candidate Mitt Romney who was campaigning against President Barack Obama. In 2016, he nominated Donald Trump in the Presidential elections. After 2016, CNN did not take him back to ‘Crossfire,’ but he continued as an MSNBC commentator. He was a co-founder of the magazine ‘The American Conservative.’

In 1971, Pat Buchanan married Shelley Ann Scarney who is a White House staffer. Together they have a cat called Gipper. He has written books such as ‘Right From the Beginning,’ ‘The New Majority: President Nixon at Mid-Passage’ and ‘The Great Betrayal: How American Sovereignty and Social Justice Are Being Sacrificed to the Gods of the Global Economy’ among others. He is currently seventy nine years old.