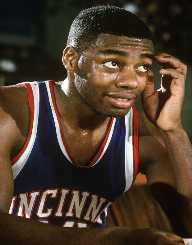 American basketball great Oscar Robertson was born on the 24 November 1938 in Charlotte, Tennessee. His family was of modest means, and he lived on a housing project in Indianapolis. His parents were Bailey and Mazell Robertson, and he had two siblings: Henry and Bailey, Jr.

Oscar Robertson was a pupil at a Crispus Attucks High School, at the time a racially segregated school. After graduation Robertson entered the University of Cincinnati and obtained a degree in business administration. In 2007, his alma mater he university awarded him a Lifetime Achievement Award in 2007.

At the high school, Oscar Robertson was coached by Ray Crowe, a coach who paid special attention to the basics of basketball. In 1955 the school’s basketball team, captained by Robertson, won the Indiana State Championship, making history by becoming the first all-black school in the U.S. to win a state title. The following year, the team remained undefeated throughout the season, winning the championship for the second consecutive year with Robertson leading the team.

After doing well in baseball in his high school years with an average of 24.0 points a game in his final season, Robertson was presented with the 1956 Indiana Mr. Basketball title. At university, he continued to impress with his basketball playing, where he scored an average of 33.8 per game. He was named All-American, College Player of the Year and also won the national scoring title.

Oscar Robertson went on to become known as one of the greatest players in the history of the game. He succeeded as an all-rounder capable of scoring from any point on the court and laid the foundation for players such as Magic Johnson. He went on to have a fourteen-year career in the NBA playing with the Cincinnati Royals as well as the Milwaukee Bucks. His most successful season was 1961/62 when he averaged a triple-double for the whole season.

He was known throughout his career as the Big O.

Oscar Robertson was College Player of the Year in 1958, 1959 and 1960. In Rome in 1960, he was part of the U.S. Basketball team which won gold at the summer Olympic Games. Oscar Robertson was inducted into the Basketball Hall of Fame in 1980. In 1996, he included in the NBA 50th Anniversary All-Time Team.

In 1998 Oscar Robertson was honored when the United States Basketball Writers Association renamed their NCAA Division I Player of the Year trophy the Oscar Robertson Trophy. And in 2009 he was inducted into the FIBA Hall of Fame. Up until 1970, he held the record for the leading NCAA scorer of all time.The University of Cincinnati awarded Robertson an honorary doctorate in 2007.

His autobiography The Big O: My Life, My Times, My Game was published in 2003.

Oscar Robertson married Yvonne Crittenden in 1960, and the couple had two daughters.

Having grown up having to deal with racism and poverty, Oscar Robertson spent his later years focusing on improving the social and living conditions of African Americans.

Over the years he has also been involved in many community initiatives and charity organizations including the American Red Cross, the American Cancer Society, Boys and Girls Clubs of America, the National Lupus Foundation and the National Kidney Foundation.