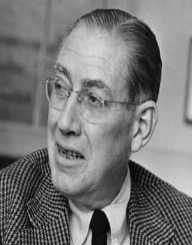 Ogden Nash was a famous American poet born in 1902. He is best remembered for his humorous light verses in Candy is Dandy and Line-Up for Yesterday among others. His unique style in his poems was a misspelling of words intentionally and the use of puns. His interest in poetry was nurtured from a young age. He was only six years old when he wrote his first poems. By the time he was 14, he owned a diary. When Nash was 29 his work Hard Lines came into being.

He was working at a publishing industry then. He also wrote children verses later in his life. He wrote children stories based on his the experience of looking after grandchildren. His writings for film production also proved to be quite a success. His poems have been ranked among the best poems of his time.

Ogden Nash was born on August 19th, 1902. He was born in Rye town in New York to Edmund Strudwick Nash and Mattie Chenault.  His father was an honorable man. He assumed the role of taking care of his mother and siblings when he was only 12. This was in 1865 during the civil war. He later came to own export and import business Nash had 3 siblings: Eleanor, Shirley, and Frederick.

The nature of his father’s business their family relocated from place to place a number of times. They lived in Savannah then moved to Georgia among other places.  His mother brought them well by instilling in them the importance of good discipline. Ogden Nash loved to collect frogs rather than hang out with girls when he was a boy. He began writing his verses at the age of six which was quite remarkable.

Ogden Nash began his early education in a school located in Rye. He later studied as a boarder at a school in Groton in Massachusetts. He was 10 years old at the time. Unfortunately, he developed some eye complications and had to drop out. His mother then homeschooled him. Luckily his eye problem came to pass and he went back to school in 1917. He joined St. George's School in the county of Newport located in Rhode Island.

He was a bright student hence did quite well in his studies. Ogden Nash was the champion of French and Latin which earned him many prizes. He graduated in 19020 upon which he joined Harvard University. He dropped his studies in 1921 when his parents could not afford his fees. Their family business was not doing well at the time.

Ogden Nash was given the opportunity to work at St. George his former school. He had passed his French well hence he taught French at the school.  He did not even finish a year at the school. He had no passion for teaching so he resigned. With time he tried a variety of jobs but he still did not settle for a particular career.

In the 1930s Ogden Nash began writing a few verses once in a while.  It led to his work Born in a Beer Garden which came to be published in 1930. In the same year New Yorker magazine published his poem Spring Comes to Murray Hill. In 1931 the magazine published his book entitled Hard Lines. By then he was a regular contributor to the magazine. Hard Lines contained verses with great humor and it came to be a great success. Even critics had a few positive comments about the book.

He portrayed the wicked ways of politicians with his work. He brought this out in a witty way which was such a unique style. This made his work stand tall among other poems at the time. He featured in Television and Radio shows sometime in the 1940s. He also started writing children stories.

Ogden Nash tied the knot with Frances Leonard in 1931. They were blessed with two daughters, Isabel and Linell.

Ogden Nash died on 19 March 1971 at the age of 68. He succumbed to Crohn's disease while receiving treatment at the Johns Hopkins Hospital.