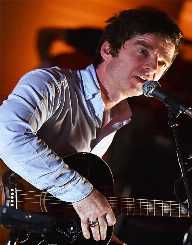 Noel Gallagher was born on May 29th, in 1967. He is a celebrated singer, guitarist and a talented songwriter. Gallagher brought fame to his side after being the lead guitarist for the famous rock band dubbed Oasis.

However, Gallagher left the band in 2009 and opted to pursue a solo career. His first album while going solo was High Flying Birds.

Noel Gallagher was born Noel Thomas David Gallagher on May 29th, in 1967. His place of birth was in a town called Longsight in Manchester, England. He was born to Irish Catholic parents namely Thomas and Peggy Gallagher. He has two other brothers Liam and Paul.

Growing up, Gallagher went through a rough childhood due to his abusive father. His father indulged in gambling and heavy drinking. Noel and his elder brother named Paul had stammering issues, and they had to go through four years of speech therapy to correct their problem.

With time, their mother received a legal notice that would separate them from their father in 1976. However, this did not occur immediately, but they were separated six years later. Peggy went ahead and raised all her sons on her own.

Life was a challenge as Peggy worked hard to keep everything in line. Regardless, the boys never gave her an easy time as they often got in trouble with the law. Noel Gallagher, for example, got his first expulsion from school when he was only 15.

At some point, Gallagher worked in a gas company. It is here where he broke the bones of his left foot. Later, in 1988, he crossed paths with the guitarist who played for Inspiral Carpets.

When one of the lead singers left the band, Noel Gallagher auditioned but was not called in as someone else was picked. Nonetheless, he became part of the road crew for the band.

With a special interest in the music industry, Noel Gallagher's brother Liam also came up with his own band named The Rain. Gallagher’s mother told him about this and he listened to their performances. However, he was not moved.

Soon, the band gave Gallagher the opportunity of being the driving force. This paved way for a number of writings for the band and that he also played as the lead guitar. The Rain band was later renamed to Oasis.

Other members of the band included Paul McGuigan, Tony McCarroll and Paul Arthurs. McGuigan was a bass player while McCarroll was a drummer and Arthurs was the rhythm guitarist.

The Oasis band had a unique style of rock performance and this appealed to Alan McGee; the forefather of Creation Records. As a result of their impressive performances, they landed themselves a contract for six albums.

The group went ahead and released their first single in 1994 –“Supersonic.” The song was an average hit as it landed them on number 31 on United Kingdom charts. During the same year, the group released their debut album dubbed Definitely Maybe.

This was a massive hit as it topped the U.K. charts. Also, the album was considered as the fastest ever grossing debut album in the history of Britain.

Some of the singles that topped U.K. charts from the Definitely Maybe album included “Live Forever,” and “Some Might Say.” Their second album also garnered them high acclaim. This album was called (What’s the Story) Morning Glory.

Things did not run smoothly in Oasis band as Noel Gallagher soon left the band in August 2009. This occurred after he had fought with Liam, his brother.

Noel Gallagher continued pursuing his music talent even after leaving the band. Her resurfaced in 2011 with the release of High Flying Birds.

They were blessed with a daughter named Anais Gallagher. In 2001, the pair divorced. Gallagher then entered into a relationship with Sara MacDonald.

He had met her earlier in mid-2000. The two were blessed with two sons in their relationship.