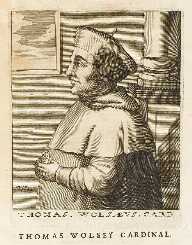 Thomas Wolsey was an English Christian clergy who rose to prominence during the reign of King Henry VIII. He wielded immense influence on the royal court that the king left him to run the daily official business.

Thomas Wolsey was born into a peasant family in Ipswich in 1473. He was the son of a butcher. Despite that, Wolsey was an intelligent child. He did his elementary studies at the Ipswich School. He later joined Magdalen College School. He graduated from high school and enrolled at the Magdalen College campus at Oxford University to study theology. Wolsey earned his theological degree at the age of 15.  He worked at the university until 1500.

Thomas Wolsey became a regular visitor to the English royal court through Nanfan. In 1507 King Henry VII chose Wolsey as the royal chaplain after the death of Nanfan. He maintained close ties to the king to the dislike of most of the English nobility. They considered him an outsider due to peasant origins. In 1508 King Henry VII ordained Wolsey to undertake several diplomatic missions on continental Europe.

In April 1509 the King appointed him the dean of Lincoln. He managed his work with youthful energy and intellectual maturity. Despite the immense opposition he got from the nobility class, Wolsey endeared himself to the royal family.

In 1509 King Henry VIII succeeded his late father King Henry VII. He quickly appointed Thomas Wolsey an Almoner. Wolsey got a seat in the royal Privy Council. King Henry VIII wanted England to be the power broker of Europe. France had broken away from the Roman papacy with its pope in Avignon. The Holy Roman Empire still pledged allegiance to the Pope in Rome, and so did England.

In 1513 war broke out between France and England. The king granted Thomas Wolsey command over the military to fight against the French. He led the English army to a successful defeat of the French. Wolsey became the king’s confidant.

After the defeat of the French by the British, King Henry VIII became a close ally of the Roman pope. He implored the pope to elevate Thomas Wolsey in the church hierarchy. In 1514 Wolsey became the Bishop of Lincoln. In 1515 he was appointed the Archbishop of York. The following year Wolsey became an English Cardinal.

In December 1515 Wolsey became the Lord Chancellor of England. He served for two years until the pope appointed him his envoy in England. Wolsey had become both a religious and political figure of influence in England. As the papal envoy in England, Wolsey drafted the Treaty of London. He envisaged the idea that England could be the political mediator in warring Europe.

As the most trusted confidant of King Henry VIII, Thomas Wolsey engaged in most diplomatic missions on the king’s behalf. In 1520 he organized a truce meeting between King Henry VIII and the French King Francis I. He managed to institute a relative truce between the two empires. Wolsey later broke the ceasefire by signing an agreement that England would support Spain if it went to war with France. In 1525 France signed a peace treaty with Spain, isolating Wolsey.

After the treaty between Spain and France, Thomas Wolsey's foreign influenced waned. Domestically, he faced another major challenge. King Henry VIII did not have a son with Queen Katherine of Aragon. The king prevailed on Wolsey to annul the marriage. Wolsey did not get a reason to grant the divorce. The king became adamant, and Wolsey took the case to the papal office in Rome. After years of deliberating and hearing petitions from both sides, Pope Leo X granted a stay to the marriage. Wolsey fell out of favor in the English royal court.

In July 1529 King Henry VIII forced Thomas Wolsey out of office. Wolsey was left with Archbishopric of York. The noble officials conspired against him. King Henry VII was informed by his counsel that Wolsey was plotting to overthrow him. Wolsey was arrested in Ipswich and taken to London to face treason charges. He died on the way.

Thomas Wolsey charmed his way to the echelons of power in England. He became immensely powerful in politics that many wondered if he was called to be a cleric.