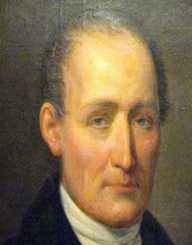 Nicéphore Niépce was a French inventor who developed heliography a skill that is responsible for the oldest photograph. He is also credited for Pyréolophore, an internal combustion engine that was first in the world.

Nicéphore Niépce was born from a wealthy family in Chalon-sur-Saône on 7th March 1765. His father was a famous lawyer. He was raised with his brother who was later to become his associate in research.

His elder brother, however, died of a mental problem in England. Apart from his brother he had two other siblings, his sister and his brother Bernard.

Nicéphore Niépce spent a number of years in Italy serving the French army. He was forced, however, to resign due to his poor health.

He later served as an Administrator of Nice District. Together with his brother, they resigned from their various jobs to do scientific research as their full-time jobs.

They later returned to their family's estate where they helped in managing them as they did their research.

In 1827, Nicéphore Niépce visited his elder brother Clauder in England who was seriously ill. His brother's bad business choices had affected his mental health. His brother later died of the condition.

Despite not possessing any skills in drawing he was captivated by lithography. His motive was to capture images from the outside world. He got his first breakthrough in his research work; he was able to capture a view of his workplace using a chemical substance.

However, Niépce never disclosed the procedure to anyone until 1829 when he revealed it to Louis-Jacques-Mandé Daguerre, his partner.

The exact date of his photography experiment was never disclosed. It is through evidence of letters  Nicéphore Niépce sent to her sister in law that indicate that he was the first to attempt such art and succeed in it.

In 1822, he created what is believed to be the first permanent image ever to be created. He met Louis Daguerre in 1829. Daguerre was also seeking to create a permanent image using a camera.

Together they managed to create an invention Aguerréotype which was later purchased by the French Government on behalf of the people.

This is was an invention by the Niépce brothers in 1807. The engine used Lycopodium powder. The engine was later used to run boats in rivers.

With the aim of increasing the water supply, the government of the day put up a competition. The Niépce brothers conceived the idea of the hydrostatic principle which was adopted for the machine. Over time the machine has undergone significant changes.

Nicéphore Niépce died on 5th July 1833. During his death, Niépce is believed to have been in a severe financial crisis.