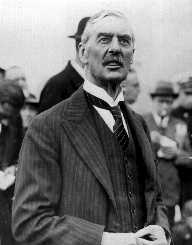 His father became the Mayor of Birmingham soon after his birth and was a successful businessman, who also held several significant government portfolios over a period including the post of a cabinet minister. Chamberlain’s mother Florence Kenrick died when he was still a child. He had two half-brothers, Austen and Beatrice and three sisters, Ethel, Ida, and Hilda, from his father’s first marriage.

Neville Chamberlain completed his elementary education from Rugby school and later attended the Mason College (currently known as University of Birmingham). His disinterest in studies was visible from a very young age. In 1889, his father arranged for an apprenticeship in a firm of accountants. Proving his mettle within six months of joining the company, Chamberlain was taken in as a salaried employee.

When Chamberlain was 21 years old, with the hope of reviving their family fortunes, his father sent him to the Bahamas to establish and manage a sisal plantation on Andros Island. He spent six years there. The farm failed, and though Joseph Chamberlain nearly lost £50,000, Neville Chamberlain had proven himself as a talented manager and an astute businessman.

His success after returning to England proved his business acumen undoubtedly. He stepped into the business world by purchasing Hoskins & Company, a manufacturer of metal ship berths. For the next 17 years, Chamberlain stayed at the helm of the company as its Managing Director and steered the business towards prosperity.

Even though Neville Chamberlain’s father and step-brother were in Parliament, in the initial days, Chamberlain kept himself detached from politics. However, he was an ardent supporter of his father’s political outfit ‘Liberal Unionists.’ In 1911, he won the election for the Birmingham City Council and was appointed as the chairman of the Town Planning Committee. The first town planning scheme of Great Britain was formulated and adopted during his tenure at the Town Planning Committee. But the looming shadow of World War I ensured that the system remained only on paper.

Chamberlain’s other political posts include his wartime stint as the Lord Mayor of Birmingham in 1915 and as the member of the Central Control Board on liquor traffic. From 1919 to 1921, Chamberlain headed the National Unhealthy Areas Committee as its chairman. His promotion as the Chancellor of the Exchequer came amid dissension among the leaders of the higher echelons of his Unionist Party. Unionists under the leadership of Bonar Law left the coalition with Liberals and decided to fight the 1922 election on their own.

His tenures in various public offices resulted in him acquiring enough experience of running an administration and led him to stand for the ‘House of Commons.’ Subsequently, he was selected as the Unionist candidate for the parliamentary seat at Birmingham Ladywood. The First World War ended in 1918 and immediately a general election was called.

Neville Chamberlain won the election by a substantial margin, getting almost 70% of the votes. A unique feat was achieved at this juncture. At the age of 49, Chamberlain became the oldest parliamentary debutant till date in the history of parliamentary democracy. The fact that he later became the Prime Minister of Great Britain made this record even more interesting.

After a few months of the 1923 general elections, in which Chamberlain had lost the position of Chancellor of the Exchequer, the ruling Labor party government felt the need for conducting another poll. Sensing apprehension, Chamberlain prudently shifted his parliamentary constituency to Birmingham Edgbaston instead of Ladywood. It proved to be a safer seat for him. He held the position for the rest of his political career.

The landmark of his life came in 1937 when at the ripe age of 68, Chamberlain became the Prime Minister of the United Kingdom. He became the second eldest person in the 20th century to have achieved the feat of being appointed as a first-time Prime Minister.

Some of his significant achievements on the domestic front after being sworn in as the Prime Minister include the factories act of 1937. By enacting the law, he ensured the better working condition of the factory workers and limitation of the working hours of female and children workers. Nationalization of coal deposits, clearance of slums, rent control and a week of paid holiday for workers by employers are his other significant contributions towards the national cause.

But as the threat of Second World War was looming large, all attention was mainly focused on the foreign policies. As far as his external systems are concerned, it was a mixed bag. Some of Neville Chamberlain's procedures were effective to a certain extent like the ‘Compromise Formula’ arrived at with Ireland.

Chamberlain had seen and survived World War I. He was well aware of the consequences of war and hence wanted to avoid the conflict by all possible means. He believed that he could prevent the aggression by appeasing Adolf Hitler. And in this pursuit of trying to avert the dreaded war, his infamous “appeasement policy’ found notoriety. Munich agreement of 1938 was the worst example of the said policy.

On May 10, 1940, the day of the German invasion of the Low Countries, Chamberlain resigned. The failure of the British expedition in Norway and erosion of his support base among the conservatives prompted his resignation.

Neville Chamberlain married Anne Vere Cole in 1911. They had two children together, Dorothy and Francis. He died on November 9, 1940, battling bowel cancer in Heckfield, Hampshire, England.