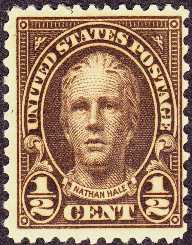 American Soldier and spy Nathan Hale was born on June 6, 1755, in Coventry, Connecticut. When Hale was 14 years old, he and his 16-year-old brother were sent to Yale College. The brothers belonged to the Linonian Society of Yale. They were fond of debating topics in astronomy, mathematics, literature, as well as ethics of slavery. He graduated from a school in 1773, when he was 18 years old. He then started to work as a teacher in East Haddam and later in New London.

In 1775, the Revolutionary War began, and Hale joined the Connecticut militia. He was elected to be a lieutenant for five months. After his official service had ended, Hale decided to extend his service, although he had a contract with New London school. The following spring the army fought in Manhattan Island against the British who were trying to take over the city. General Washington needed a spy to determine the location of the British invasion. Hale was the only volunteer for this job.

Nathan Hale’s great-grandfather was Reverend John Hale, who had an essential role in the Salem witch trials in 1692. His uncle was statesman Edward Everett, who was the second speaker at Gettysburg.

In 1776, Nathan Hale began his spy mission. At the time, spying was punishable by death. Therefore Hale’s life was at risk. On September 8, he was ferried over to the enemy territory. He was posing as an itinerant teacher. From Norwalk, Hale traveled to Huntington, Long Island.

During this time, Washington had to retreat from southern part of Manhattan, around Wall Street, to Harlem Heights. It is possible that Hale heard about the attack and went to New York to gather as much information as he could.  On 21 September, the Great New York Fire broke out and burned the lower portion of Manhattan. After the fire, around 200 American partisans were captured, and so was Hale.

It was speculated that Major Robert Rogers recognized Hale. Roberts posed as a fellow patriot and gained Hales’ trust. Hale told him about his mission, and Rogers invited him to dine at his house. During dinner, Hale was captured. There is also a version that Hale was recognized by his cousin, who was a loyalist.

Hale was kept in the headquarters of William Howe in Beekman House, a rural part of Manhattan. Hale was questioned about his rank and mission aim. Also, maps and drawings of fortification were found on him. Major Robert Rogers provided all the information about the case. He was then quickly sentenced to death by hanging on the following morning. Hale spent the night in a greenhouse but was denied his request for a bible and a clergyman.

On September 22, 1776, Hale was marched to the Park of Artillery and hanged. Hale was 21 years old at the time.

Despite failing as a spy, Nathan Hale quickly became one of the faces of revolution. It has been reported that Hale said the words “I only regret that I have but one life to lose for my country.” His last sentence was widely publicized afterward. His last words were even written into Revolution ballads. The Patriots needed a hero, and Hale quickly became one. He was a young and well-educated man, who sacrificed his life, despite the fact that spying wasn’t seen as a noble act.

Statues of Hale are mostly based on how he might have looked at the stories of people who knew him. Nathan Hale was declared the hero of the state of Connecticut in 1995.