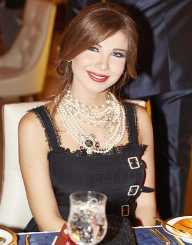 Singer and entertainer Nancy Ajram was born in Beirut, Lebanon on the 16 May 1983 to Nabil Ajram and Rimoda Qun. Ajram has two siblings, Nabi Ajram Jr and Nadine, both of whom are in the entertainment business.

Nancy Ajram started singing at a young age, appearing in concerts. When she was eight, she made her first television appearance singing in a nationally televised program in Lebanon. As a twelve-year-old, she looked in a local television competition, Stars of the Future where she won gold in her category. Ajram was still a teenager when she released her first album.

Nancy Ajram had cut two albums before she found herself being noticed. Her third album Akhasmak Ah was a bestseller and was followed up by Ah W Noss, which also sold well.

By 2007, Nancy Ajram had perfected her art, and Betfakar Fi Eih is considered by many to be her best work. It brought her a fair amount international recognition and made her name globally. In 2008 she won a World Music Award for The Best Selling Middle Eastern Artist. All of this has ensured that Ajram has now reached the almost iconic status in the music world in the Middle East.

Nancy appeared in famous television commercials and had released two albums for children. Since then Ajram has become a singing sensation with the Midas touch. She plays to sell-out concerts, became the first female spokesperson for Coca-Cola in the Middle East and was appointed the face of Farfasha, the Dumas jewelry collection.

Nancy Ajram has won numerous awards including the World Music Award. Kuwait Newsweek included her in their Most Influential Arab Personalities in 2005. In 2010 she was chosen as the Best Female World Singer of the Year, winning the World Travel Award.

In 2008, Nancy Ajram married Fadi El Hachem, and they have two daughters. Ajram’s net worth is estimated at US$41 million.

Nancy Ajram was born into a Maronite Catholic family.

Nancy Ajram has spoken on the record about how she feels a sense of responsibility to others, which is why she became a Unicef ambassador. She is particularly concerned with child poverty and has an organization which distributes money to the poor