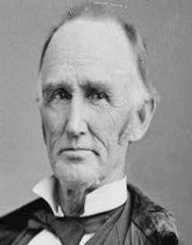 Montgomery Blair was a lawyer and a politician in the 19th century. Despite being conservative on racial policies, he is remembered for his anti-slavery position and always disagreed with Radical Republicans. He was a Postmaster General in the Lincoln Administration.

Montgomery Blair was born on 10th May 1813 in Franklin County. His father Francis P. Blair was also a politician; he was a popular member of the Democratic Party. Blair's close relation to his dad contributed to his passion for politics.

He went to States Military Academy and graduated in 1835. He joined the Army immediately after graduating where he served during Seminole War.

One year after his service in the Army, Montgomery Blair proceeded to study law at Transylvania University. After attaining the law degree, he started practicing it in 1839 at St. Louis Missouri.

He was appointed as the Missouri District Attorney in 1839. Three years later, he was elected as mayor of St. Louis in 1843 before eventually serving as Court of Claims Judge in the U.S.

In 1857, Blair was an attorney for Dred Scot in a Supreme Court case that was highly prominent.  It was a case that was seeking to end slavery in the U.S.

Due to his father's influence, Montgomery Blair was a Democratic Party member before later switching to Free Soil party. Blair's anti-slavery stand led him to join the Republican Party.

Even though he had desired to serve as the secretary of war in Lincoln's administration, the president awarded him the position of the Postmaster General.

Despite being a highly antagonistic cabinet member, he was successful in the cabinet position in Abraham Lincoln first term.

At the beginning of his second term, Lincoln was under intense pressure by the Republican Politicians to lay off Montgomery Blair from his cabinet. The president bowed down to pressure despite his close relationship with Blair.

His quest to be the United States Attorney General hit the rock when the position was given to Salmon P. Chase. He later rejoined the Democratic Party, then using it to run for Congress but lost.

Montgomery Blair married Caroline Rebecca Buckner in 1836. After his first wife's demise in 1844, he married Mary Elizabeth Woodbury; they had four children, one daughter, and three sons.

Montgomery Blair died on 27th July 1883 after a persistent problem of his spinal membrane. His body was laid to rest in Rock Creek Cemetery.

To keep his memory, the United States shut down Post Master General position in the cabinet.