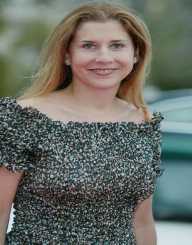 Monica Seles is a Hungarian professional female tennis player. She was born on December 2, 1973, in Novi Sad in Yugoslavia (Serbia). She started playing tennis when she was five years old and was trained by her father. In order for it to be more exciting for her, her father, who was a cartoonist, drew her cartoons that explained the mechanics and theory of tennis. Her father introduced a two-handed style for forehand and backhand to Monica Sales.

Monica Sales developed her tennis skills very quickly. She won a Junior Orange Bowl tournament in Miami, USA, when she was only eleven years old, in 12 and 14 years categories. Only nine tennis players have achieved this since the history of this tournament. That is when she was noticed by a tennis trainer Nick Bollettieri. She moved with her family to the United States in 1986 and trained in Nick Bollettieri Tennis Academy for several years.

When Seles was 14 years old, she took part in her first professional tournament as an amateur, and afterward quickly turned to professional tennis. Her first career title win was in May 1989 in Houston. A month later she reached semi-finals of Grand Slam tournament and lost to Steffi Graf. Her first tour went extremely good, as she ranked number six.

After the start of her career, Seles developed quickly and won Grand Slam tournament for singles at the 1990 French Open. This win made her the first youngest tennis player who won this tournament – she was only sixteen and a half years old.

In March of 1991, Seles overtook Steffi Graf and became worlds first racket. In 1991 she participated in several more tournaments (Australian Open, French Open, US Open and more), and had been successful in winning 10/16 tournaments she participated in. The only one she did not participate in was Wimbledon. In 1991 Seles reached the finals of every single tournament that she took part in. This streak continued also in the year 1992, except in 1992 she had the chance to participate in Wimbledon, which she missed the previous year because of shin splints.

During Wimbledon in 1992, Seles gained some popularity in the field of tennis because of her grunting and shrieking during a game. It has been reported that some reporters attended matches with decibel meters, which were comically named “Grunt-o-meters”, to evaluate how loud the grunts actually were. Two of her opponents, Nathalie Tauziat and Martina Navratilova, complained about the loudness to the chair umpire during matches.

Up until the beginning of 1993, Seles had excellent winning statistics. Her winning percentage was calculated as high as 92,9%. During her first four years in tennis, she had won 90,2% of all matches and had received 30 titles.

The year 1993 also started excellent, with winning almost all of her opponents in tournaments, until an unfortunate accident on April 30. That day a psychologically unstable fan of Steffi Graf attacked Seles. To that day Seles had defeated Graf 3 times in Grand Slam finals. The attack happened, while Seles was having a quarterfinal match in Hamburg. The fan of Graf, named Günter Parche, ran out of the crowd in between games with a knife and stabbed Seles. The attack happened from behind. The knife injured Seles between her shoulder blades, it went approximately 1,5 cm deep. Even though Seles was taken to the hospital immediately and the wound was not too deep and healed quite well in a short time, Seles left tennis for a longer time – almost three years.

There was some speculation about the motives for the attack. Some inclined that it had to do with Seles being from Yugoslavia. Because she had also received death threats, this version seemed very real, but the German authorities ruled it out quickly.

The attacker was not put in jail, because it was discovered that he is mentally unhealthy. This event brought up a huge discussion about security and safety in tennis tournaments. Some changes in trophy presentation ceremonies and audience seating were introduced in the next French Open and Wimbledon, which took place very soon after the attack.

Seles announced that she would never play tennis in Germany ever again, as the attacked did not get sentenced for the attack, but was just kept under observation.

Following the attack, a musical band from Australia “Young Elders” created a song “Fly Monica Fly” for Seles. Seles admitted it was inspiring, and also met the band. The band later renamed their band to “Monicas”, when in 1996 Seles won Australian Open. Later on, some other musicians and artists also contributed their work to this incident.

Monica Seles recovered from the attack and returned to sports in 1995. It was proposed to rank Seles as number one together with Steffi Graf, which was accepted, but considered unfair towards other tennis players and raised some discussions.

Upon returning, Seles continued her winning streak in Canadian Open, US Open, Australian Open and other tournaments. She was not able to reach another Grand Slam final, but she was often in semi- and quarterfinals. Her last full tour year in 2002 she finished as the world no.7. Seles participated in 1996 and 200 Olympic games, and after she got a US citizenship in 1994, she was a good asset for the US team, helping them win the Fed Cup 3 times – in 1996, 1999 and 2000.

Seles got an injury that kept her from playing in 2003. After that, she did come back and participated in some tournaments, but was not as successful as before. Despite wanting to return to professional tennis, she officially announced her retirement 2008. She was 34 years old at that time.

Outside The Tennis Court

After her knife attack Seles took some time to write and publish a book “Getting A Grip: On My Body, My Mind, My Self”. It was released in 2009. Two major topics discussed there were depression and eating disorder. She also included her story on dealing with her father’s cancer and death and explained the road of returning to tennis.

The private life of Monica Seles is less hectic than her career. She has been dating Tom Golisano since 2009 and they got engaged in 2014.

Since 2015 Seles is working together with a pharmaceutical company “Shire” to raise awareness of eating disorders.