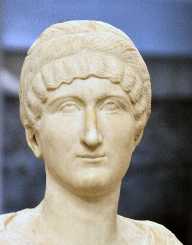 Constantine the Great was born on February 27th, in 272. He was famed for being a Roman Emperor. He was from the Illyrian descent, and he took over as the ruler from 306 to 337 AD. During his tenure, Constantine was admired for his style of leadership. He brought numerous changes that mainly strengthened his empire.

During his time in office, Constantine ensured that the military and civil authorities were separated. This paved the way for a government restructuring. The idea of praetorian prefecture came about during his time as the ruler. He is also to be credited for being the first emperor that converted into the Christian religion. This, therefore, made him a notable individual in the history of Christians.

Little information is known about Constantine the Great. However, history has it that he was born on February 27th, 272. He was the son of Flavius Constantius and Helena. His father was in the Roman army. On the other hand, it is not known whether Helena was his wife or just his concubine. His father was highly adept in the military, and this contributed to his quick rise in the military ranks. In the year 293, his father was appointed to serve as the deputy emperor (Constantius I Chlorus). During this time, the emperor was Augustus Maximian.

Later, Constantine went on to be raised in the Eastern Empire. This was after his parents had separated. This brought a positive impact on his education as he was schooled in the best standards at the time. He studied literature and also took Greek and Latin lessons.

With time, Maximian’s failure on the throne meant that he had to step down. This paved the way for his father’s opportunity to take over as Emperor Constantius I in 305. His son, Constantine followed suit and joined his father in fighting with him in the army.

In 306, his father passed away. Constantine’s fellow troops declared that he takes over as the emperor. During the initial periods, he faced several objections from organized Roman groups. Maximian’s son called Maxentius was among those that actively objected his immediate accession to the position of a ruler.

After some time, Constantine was crowned as the emperor to the West, but he had to share the emperorship position with Maximinus and Licinius who both ruled the eastern side. In 316 however, Constantine battled with Licinius where he conquered him and took part of his territory. Later, in 324, he again attacked Licinius and this time he emerged victorious. His second victory gave him the power to act as the sole ruler of both the west and the eastern side.

During the same year, Constantine came up with the idea that the eastern side should be wholly absorbed into the Roman Empire. As a result of this, Constantinople city that was located in Byzantium was established.

While Constantine was serving as the emperor, there were numerous changes that he advocated which empowered his empire. Some of these reforms touched on both administrative and religious changes. Other monetary improvements also contributed to the strength of his empire. Constantine's religious inclination also meant that the fiscal policies he pushed for were closely tied to Christianity policies.

Constantine's strong religious background earned him high acclaim. He was credited with being the first emperor that legalized Christianity as a religion. He also permitted other cults to exist in his territory. Holy Sepulchre church was also built after Constantine had given orders for this to be done.

History has it that Constantine brought Minervina to his life in 303. However, it is not known whether he took her as a wife or as a concubine. They were blessed with a son named Crispus in this relationship. He later tied the knot with Fausta. She was the Roman Emperor Maximian’s daughter. Marrying Fausta was out of a political alliance that would benefit Constantine’s territory.

Years later in 320s, Crispus, his eldest son and his second wife were executed. This was as a result of their immoralities.

Constantine passed away on May 22, 337. He had been sick before he finally kicked the bucket. His three sons with Fausta succeeded him.