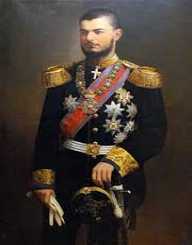 Alexander I of Serbia was the king of Serbia born in 1876. He claimed the throne when he was only 16. However, he died at a young age after he was assassinated by shooting. During his reign, he changed the constitution of 1888 from liberal to conservative in 1869.

At first, he was popular and accepted as king. However, his engagement with Draga Mašin an alleged prostitute was not agreed upon by his mother, the army, and the entire country. The engagement is what led to his fall and death.

Alexander I of Serbia was born on august, 14 1876 in Belgrade, Serbia. He was the only son of King Milan and his wife queen Natalie of Serbia.


Rise to the Throne

When king Milan suddenly withdrew to private life in 1889, he proclaimed his son Alexander the next King. This was to take effect immediately he attained 18 years. However, Alexander decided not to wait until his 18th birthday as instructed.

When he turned 16, in 1893, he proclaimed his position. Luckily for him, his action was welcomed with open arms by the majority of his people. He appointed a radical ministry and abolished the liberal constitution in 1869.

Alexander then replaced it with the conservative one and treated the 1897 Greco-Turkish War with neutrality. He appointed his father as Serbian’s army commander-in-chief in 1898.

Alexander’s announcement concerning his plans to wed Draga Mašin in 1900 was highly disputed. She had a bad reputation and alleged to be infertile. He banished his mother from the kingdom for being among those who were against his engagement.

In August 1900, he went ahead and married Draga Mašin. Their union not only weakened Alexander’s position as king in the eyes of the army but also, of that of the entire country.’

Alexander I of Serbia died quite young following an assassination. He was only 26 years old when he died on June 11, 1903, along with his wife. Both were shot in the king’s palace. Their bodies were laid to rest in St. Mark's Church, Belgrade.