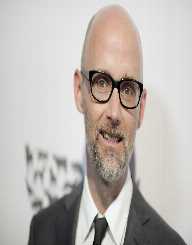 Moby is an American pop singer, DJ, producer, and photographer born on September 11th, 1965. His famous work includes his albums 18 and play.  He is a descendant of The Moby Dick’s author Herman Melville. This is where he acquired his stage name Moby. His latest album is the 2017 More Fast Songs About The Apocalypse, his 14th studio album.

Between 1982 and 1985, Moby was with Vatican Commandos, the hardcore punk band. As a record producer, he produced for music legends such as Michael Jackson, Daft Punk, David Bowie and Metallica among other music stars. He has also appeared in the film industry including the Pittsburgh in 2006.

Moby was born on September 11th, 1965 as Richard Melville Hall. His place of birth was in Harlem, New York in the United States. He was the son of James Frederick Hall and his wife, Elizabeth McBride. His mother was a medical secretary. His father, on the other hand, was a chemistry professor. Sadly, he passed on when Moby was only two. His mother brought him up in Darien, Connecticut along with her parents. Meanwhile, she continued her college studies and attained a degree. Moby developed a music passion from a young age, and his mother helped him nurture his talent.

At the age of 9, Moby began playing his music. He schooled in Darien High School where he came up with the Vatican Commandoes band. Together they released their first album EP, Hit Squad for God. Later, he also joined Awol band. In 1983, he graduated from the school and studied philosophy at the University of Connecticut. However, he cut short his studies a year later and pursued his dream in music.

Before his fame, Moby performed in many nightclubs. He also joined local bands like Gin Train and Caeli Soul. In 1989, he decided to move to New York in search of greener pastures. "Mobility, his first single was released the following year. His next single was "Go," which became a hit song and appeared in top 1o of the UK list.

Moby then released his first album Everything is Wrong in 1995 and was a great success. The following year he wasted no time releasing his second album Animal Rights. Subsequently, I Like to Score premiered in 1997.

Moby went ahead to produce other successful albums in the following years. In 2005, he released Hotel followed by Last Night in 2008. The following year Wait For Me premiered then Destroyed in 2011. Later in 2017, he also released the album More Fast Songs About The Apocalypse in 2017.

Moby released his first book in2010 with the title Gristle: From Factory Farms to Food Safety (Thinking Twice About the Meat We Eat). The book comprises of many essays collected from people involved in the food industry.

Moby used to date Kelly Tisdale. He is also a great advocate of animal rights and launched his restaurant Little Pine in Los Angeles in November 2015. Also, he was a heavy drinker till later when he adopted sobriety.