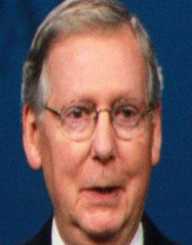 Mitch McConnell was born on February 20th, in 1942. He is famous for being a Republican Senior Senator hailing from Kentucky. Recently in 2014, he was appointed to serve as the Senate majority leader.

Mitch McConnell was born on February 20th, in 1942. His place of birth was in Sheffield in Alabama. He is the son of Addison Mitchell McConnell. His mother’s name was Julia. When McConnell was aged two, he was affected by polio. However, he managed to survive following the treatment that he went through at the Warm Springs Institute situated in Georgia.

After his family migrated to Louisville, Mitch McConnell joined DuPont Manual High School. After this, he joined the University of Louisville where he earned his bachelor’s degree in political science. Three years later, he completed his studies at the University Of Kentucky College Of Law. Here, McConnell was a student leader as he headed the Student Bar Association.

With a special interest in politics, McConnell took an internship program in 1964. During this period, Senator John Sherman Cooper was in office. His internship experience became a significant reason why he finally decided to run for a senate position. Sooner or later, McConnell also served as Senator Marlow Cook’s assistant.

In 1984, Mitch McConnell won the U.S. Senate elections. He was competing against Walter Dee Huddleston. In 1990, he also competed for the same position, winning by a slim margin. Still, in 1996, McConnell took advantage of unique political campaign TV ads to attract a mass audience to his side. This significantly contributed to his third win for the office of U.S. Senate.

In 1996, he was also appointed to serve as the National Republican Senatorial Committee’s chairman. After that, in 2002, his profile gave him the advantage of being voted in to serve as a chief whip. After four years, he again rose to become the Senate’s majority leader.

Mitch McConnell's first marriage was to Sherrill Redmon. The two were a couple from 1968 to 1980. Together, the two welcomed three children in their marriage. In 1993, he married Elaine Chao. Chao served under the office of the former U.S president George W. Bush as the Secretary of Labor. In November 2016, President Donald Trump nominated her to offer her services as the Secretary Of Transportation.