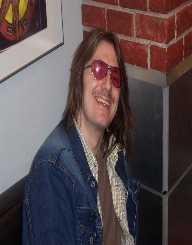 Mitch Hedberg came to prominence when he appeared on the Late Show with David Letterman in 1996. Then in 1997, he won the Seattle Comedy Competition. In 1998 he was in That 70s Show. He won wide acclaim at the Just for Laughs Montreal Comedy Festival in 1999 and Time magazine remarked that he could be the next Jerry Seinfeld.

Films he appeared in include Los Enchiladas! In 1999, Almost Famous in 2000 and Lords of Dogtown in 2005. He recorded three CDs: Strategic Grill Locations, Mitch All Together and Do You Believe in Gosh?

Mitch Hedberg married fellow comedian Lynn Shawcroft in 1999 and then remained together until his death in 2005.

Mitch Hedberg developed a drug and alcohol problem, He was arrested in May 2003 in Austin, Texas for being in possession of heroin and in 2005 he died of a drug overdose in Livingston, New Jersey shortly after completing a forty-four city tour with his wife Lynn Shawcroft as the opening act.