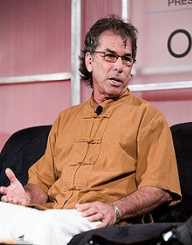 Mickey Hart is an American drummer, percussionist, rock and roll musician, and book writer. He is most famous for his work with the band Grateful Dead.

He was born Michael Steven Hart on September 11, 1943. His drummer parents were Lenny and Leah Hart. Mickey Hart was born and bred in New York by his single mother. His father left his mother when he was barely a year old. He joined Lawrence High School after his elementary studies. Hart dropped his studies in high school to join the military. In 1961 he joined the air force and was sent to Spain. He served in the US military base in Spain until his discharge in 1965.

Hart was musically inclined from his childhood. He learned to play the drums from his mother. While in high school, he was part of the All-State Band. He continued playing drums with the air force band. After he returned to the US during a brief military break, he went to California. He tracked and found his father. They established a relationship which died soon after he was redeployed back to Spain.

When he came back from Spain, Hart met again with his father. They founded a music store called the Hart Center. He continued performing in local events and concerts.

In September 1967 Hart joined the Grateful Dead band. He was invited by Bill Kreutzmann, the lead drummer at Grateful Dead. The band had a set of drummers. This was unique but added value to the music. He stayed with the band until the beginning of the 1970s. In 1971 he left the band for a solo career. In 1972 Hart released his solo debut album Rolling Thunder. In 1974 Hart reunited with his former band. They had a tour and performed at a concert in Winterland, San Francisco. The following year, Hart resolved to stay with the band. They recorded and released their career-best album Blues for Allah.

In 1976 he tried a solo project with another amorphous band Diga Rhythm Band. He released an album with the band titled Diga. He then went back to his Grateful Dead Band. Hart had a love-hate relationship with his fellow drummer Kreutzmann. In 1995 Jerry Garcia, the band guitarist died. Garcia was the de-facto peacemaker and reconciliatory. The band disbanded due to the constant internal strife.

Hart decided to pursue a solo career. He experimented with musical fusions from all over the globe. He co-opted several musicians into a unique fusion of musical performances. He admired the input of Nigerians Babatunde Olatunji and Sikiru Adepoju. He also fused his music with collaborations with Asian and Oceanic artists. The percussions, drums and other exotic instruments gave rise to another genre of instrumental music that endeared Hart to the music lovers.

Currently, he is involved with collecting and performing with other global artists in musical tours. He has already made collections for the Smithsonian Museum from his songs with African musicians from across the Sahel. He occasionally does music performances with former colleagues from the Grateful Dead Band. Up until 2013 when he stopped recording albums, Hart had over thirteen albums.

Apart from winning a Grammy in 1991for his music, Hart is well known for his community work. He is an advocate and member of several organizations trying to preserve traditional instrumental music. He partnered with the American Folklife Centre to archive rare music artifacts from extinction. He is also a member of the Smithsonian Museum promoting the preservation of folk music. He is a member of the Institute for Music and Neurologic Function. This charity organization supports the initiative of using music as a medicinal therapy for the rehabilitation of patients.

Hart is a member of the Rock and Roll Hall of Fame. He was inducted in 2000 for his role with the Grateful Dead Band.

Hart got to married to Caryl Hart in 1990. They had two children from their union. Hart is of the Jewish faith and lives in California. When not playing music, he keeps collecting exotic musical instruments from around the world.

Hart is still actively involved in the percussion movement. He strives to meet anyone who is interested in traditional instrumental music from all over the globe. Hart is arguably the musician who plays the widest range of musical instruments. He plays over 30 different instruments, from drums, shakers, and African plucking instruments.

Despite not having a solid formal education, Hart has made a lasting mark in the world of traditional music.