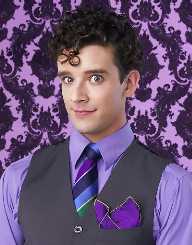 American actor Michael Urie was born in Dallas, Texas on the 8 August 1980.

After graduating from Piano Senior High School in 1998 enrolled at the Collin County Community College. He then attended the Juilliard School in New York City (2003). In his graduation year, he was presented with the John Houseman Prize.

After graduation, Michael Urie worked in theatre across the country gaining experience in various genres including musicals, drama, and comedy. He rose to fame when he played the role of Marc St James in Ugly Betty, a successful television series.

His success in Ugly Betty was followed by roles in various stage productions including playing a fashion designer in The Temperamentals, a role in The Cherry Orchard, Angels in America and Show for Days. His first Broadway appearance was as Bud Frump in How to Succeed in Business Without Really Trying. This work was followed by a television series, Partners; Modern Family, The Good Wife, Hot in Cleveland and Workaholics. Apart from acting on film and in television, Michael Urie has appeared as a host, e.g., he hosted and curated films on Logo’s Cocktails & Classics. He shot a documentary, Thank You For Judging; and directed He’s Way More Than Famous Than You, his first feature film. His latest success has been with the one person stage production Buyer & Cellar where he portrayed various characters including Barbra Streisand.

Michael Urie has received some nominations and awards including 2013, the  Drama Desk Award for an Outstanding