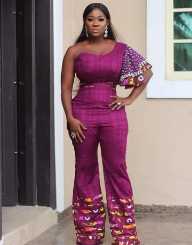 Mercy Johnson comes from a family of 7 children, and she was the middle child in this large family. She was separated from her mother when she was just two years old when her father took her away. She is a native of Nigeria and was born on the 28th day of August 1984 in Lagos state, Nigeria.

Mercy’s primary school years were spent in the city of Calabar in the southern fringes of Nigeria and partly in Lagos. Since her father was a military hand, she attended the Nigerian Navy Secondary School for her secondary education. Her background was one of deprivation, and she had spells of hawking wares to boost her family finances.

Mercy Johnson reminisced about those early years when she had to work as a housemaid to survive. Her family lived in a ragtag house at a time with lizards lingering around. There were holes in the walls, and the ground was bare and not plastered.

After her bid to get into the university failed, Mercy Johnson contacted a friend to help land a role in the burgeoning film industry in Nigeria. She waited long before a reply came her way after a year. This was, however, the breezy start for her as she landed a role in 2014 in the film, The Maid.

The film got her rave reviews and her role as a character who was a haunted maid, and it caught the attention of viewers. She starred in three more movies during the year to begin her career progression steadily.

Mercy Johnson starred in more than six movies in the following year and over the course of the next 36 months, she snapped a role in close to 100 movies.

Mercy hit a bad turn in 2013 when she was banned from acting in Nollywood along with a few other actors by film directors. This was because she was a member of the select group of actors that have become too pricey and making outrageous demands. She, however, got off the hook in May, in the next year.

To date, she has starred in more than 150 movies, and many of these have been huge hits at the box office. Her most recent work was in 2015, and the film was tiled Thy Will Be Done. This film was released in February 2015.

Mercy Johnson became selective of her film roles in 2009, after her romantic interest, Prince Odi, voiced disapproval of her romantic scenes. This led to her rejection of nude scenes and scaling down of the number of scripts she was accepting.

Mercy Johnson is one of the best known Nigerian actresses, and her place in the industry is one that is without a shadow of a doubt. Her long list of films is impressive, and many are looking forward to her starring in a major Hollywood movie.

Mercy has shown a genuine kind-heartedness and has stepped up to become a role model for many up and coming girls across her country. Her happy family life has also translated into a strong acting pedigree.

Mercy Johnson made front-page news recently when she was pictured riding the train in Lagos with her daughter. The train is considered a means of transport for the underprivileged in Nigeria, but she dared the odds. She explained later on that her car was problematic, so she opted for the train. She felt no fuss mingling with the ordinary day-to-day people who ride the train. This was perhaps a testament to her humble beginnings, and she did not forget how low she started out in life.

Mercy Johnson has graced the front page several times, and this has been reprised after her first movie debut. Her rise to stardom was turbo-propped as she showed how talented she was in her display on set.

She was the 2009 winner of the nest Supporting Actress in the African Film Awards. In 2013, she was again at the podium to pick the African Magic Viewers Choice Awards as Best Actress for her role in the film, Dumebi The Dirty Girl.

Some of her most reviewed films are Act of Faith 1 and 2, Married to the Enemy, Guilty Pleasures, Hustlers and 30 Days in Atlanta.

Mercy Johnson got married in 2011 and in August to Prince Odianosen Okojie, who is a prince from Edo State, in the southern mid-belt of Nigeria.