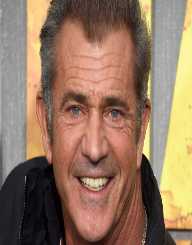 Mel Gibson is an American actor, film director, and producer. He is best known for his portrayal of Max Rockatansky in the Mad Max movies, and Martin Riggs in Lethal Weapon. In 1985 he became the first person ever to be named Sexiest Man Alive by People Magazine. The 61-year-old prolific actor and filmmaker has starred in 47 films, directed five films, produced 11 films, and written three films. He is currently experiencing a comeback after accusations of anti-Semitism, racism and sexism were made against him following the release of several infamous tapes that threatened to end his career.

Mel Colmcille Gerard Gibson was born in Peekskill, New York on January 3, 1956. His father, Hutton Gibson is a writer known for his Sedevacantist pieces, as well as his endorsement of conspiracy theories. His mother was an Irish woman named Anne Reilly. Mel was the sixth of their eleven children, raised as Sedevacantist Catholics.

When Mel was 12 years old, Hutton moved with his family to Sydney, Australia. He attended high school at St. Leo’s Catholic College in Sydney. After graduation, he went on to attend the Australian National Institute of Dramatic Art.

Mel Gibson began his acting career in the theater before moving on to the TV. Since the beginning of his acting career, Mel had good reviews from the critics. In 1976 he appeared in an Australian TV series called The Sullivans. Shortly after graduating college, he starred in the film Mad Max (1979).

Mel Gibson was cast as the lead in the movie Gallipoli, released in 1981. This movie, for which he received the Best Actor Award from the Australian Film Institute, helped establish his reputation as a serious actor. Throughout the 1980s, he reprised his role as Max Rockatansky, an ex-cop battling ruthless motorcycle gangs, in the Mad Max movies. This is often considered his breakthrough role.

Mel Gibson's fame gradually increased with each performance. Mad Max 2: The Road Warrior (1981) became his first hit in America. He went on to earn his first million in the third installment of the movie series: Mad Max 3: Beyond Thunderdome (1985). After taking some time off, he returned to start acting in the Lethal Weapon movies, which further cemented him as an action hero.

Mel Gibson is also an accomplished director and producer. In the late 1980s, he founded a production company called Icon Entertainment. This company has produced more than 50 films, including several Gibson has starred in, as well as 5 TV series.

In 1993, Mel Gibson directed and starred in The Man Without a Face. Then, in 1995, he acted, directed and produced Braveheart. This is a movie about the struggle of William Wallace, a Scottish warrior who led the fight against England for Scotland’s independence. It became one of Gibson’s best-known works. It earned him a Golden Globe Award and Academy Award for Best Director, as well as an Academy Award for Best Picture.

The early 2000s was a period of very successful movies for Gibson. In 2000 he starred in The Patriot, Chicken Run, and What Women Want. Each of these made over 100 million dollars. The movie Signs, released in 2002, became the highest-grossing movie of his career.

During this period Mel Gibson also directed and produced The Passion of the Christ (2004). The film, starring Jim Caviezel, is about the last 12 hours of Christ’s life. It was shot entirely in Aramaic, Hebrew, and Latin, with English subtitles. It was criticized for its negative portrayal of Jews and excessive violence. Still, it became the biggest grossing R-rated movie of all times. In 2006 he also directed Apocalypto.

More recent work includes his portrayal of Luther Voz in Machete Kills (2013), and Conrad Stonebanks in The Expendables 3 (2014). He has also been cast as the lead in the movie Dragged Across Concrete due to come out in 2018. A recent directorial work, Hacksaw Ridge (2016), was nominated for Academy Award for Best Director.

Mel Gibson has received numerous awards and nominations throughout his career. Among the most notable ones are:

Honorary Officer of the Order of Australia (1997)

MTV Movie Award Nomination for Best Actor for The Patriot (2000)

Robyn and Mel separated following Gibson’s arrest for DUI in 2006. Moore filed for divorce in 2009 after pictures of Gibson with his new girlfriend, Oksana Grigorieva, surfaced. Their divorce was finalized in 2011. Moore received half of Gibson’s fortune, $400 million, making it the costliest settlement of any separation in the history of Hollywood.

After separating from his wife, Mel Gibson dated Russian pianist and songwriter Oksana Grigorieva. In 2009, Grigorieva gave birth to Gibson’s eighth child, a daughter named Lucia. However, by 2010 the couple had bitterly split. The breakup gained public notoriety due to allegations of a domestic violence incident. Audio recordings surfaced in which Gibson is heard verbally abusing Grigorieva. They managed to reach a settlement in 2011.

Gibson went on to date writer and equestrian champion Rosalind Ross, his current partner. She is 34 years his junior, and in 2017 gave birth to their son Lars Gerard. They have been together since 2014.

Mel Gibson has been involved in a variety of philanthropic efforts. Along with his now ex-wife, they worked with the charity Healing the Children. They are also patrons of the art, giving money for the restoration of Renaissance art, and to the Australian National Institute of Dramatic Art (NIDA). Gibson has also funded projects for ecological conservation and archaeological exploration in Central America, as well as donated money for the indigenous population.

Mel Gibson has battled with alcoholism throughout his career. In 2006 he was arrested for DUI (driving under the influence). During his arrest, he exploded in anti-Semitic comments towards the police officer, for which he later publicly apologized. His wife separated from him after this incident.  He has also described himself as being manic-depressive and bipolar.

After his split from Grigorieva in 2010, she filed for a restraining order against him. This order restricted his access to both her and their daughter. The clause concerning their daughter was removed the next day, and Gibson got his restraining order against Grigorieva. Then, Grigorieva filed charges against Gibson for an alleged domestic violence incident. Shortly after that, audio recordings circulated on the Internet in which Gibson could allegedly be heard aggressively disparaging Grigorieva.

Around the same time, Mel Gibson was accused of racism, anti-Semitism, and sexism by civil rights advocates. Although authorities later questioned the authenticity of some of the tapes, the whole situation did much to damage Gibson’s career. Following the release of the tapes, he was dropped by his agency. Projects in he was set to appear, like the movie The Hangover 2, fell through.  Gibson and Grigorieva managed to reach an agreement in which she was granted $750,000. She also got a house to live in with their daughter until Lucia turns 18.