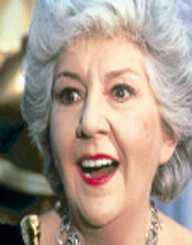 American actress Maureen Stapleton was born Lois Maureen Stapleton in Troy, New York on the  21 June 1925. Her parents were Irene Walsh and John Stapleton, and they divorced when she was a child. Her father as an alcoholic and was not present in her life. Leaving home at 17, she traveled to New York City with $100 she had saved.

Maureen Stapleton was educated at Troy High School. After relocating to New York City, she enrolled at the Herbert Berghof Acting School and did various jobs to support herself including modeling. Once she started acting, she studied at the Actors Studio alongside Joanne Woodward, Montgomery Clift, Marlon Brando, and others.

In 1946, Maureen Stapleton made her stage debut in The Playboy of the Western World, portraying Sarah Tansey. She went on to appear in various productions including Anthony and Cleopatra before winning a Tony Award for her role in The Rose Tatto (1951). She also appeared on Broadway as Ida in The Cold Wind and the Warm (1958) and Toys in the Attic (1960), as well as Orpheus, Descending alongside Joanne Woodward and Marlon Brando.

In 1981, Maureen Stapleton was inducted into the American Theatre Hall of Fame. She won an Emmy Award in 1968 for her in Among the Paths of Edan. Stapleton was nominated for four Academy Awards.

Maureen Stapleton was an alcoholic and also suffered from anxiety.

Maureen Stapleton was married to her business manager Max Allentuck (m.1949 - div. 1959), and they had two children, a daughter Katherine and a son Daniel.  Her second husband was screenwriter and playwriter David Rayfield (m. 1960 - div.1966). Maureen Stapleton died of lung disease on the 13 March 2006 in Lenos, Massachusetts, aged 80.