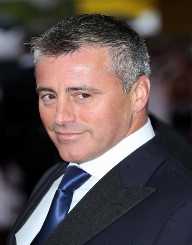 Matthew Steven LeBlanc was born 25th July 1967, to Paul and Patricia LeBlanc. He was born in Newton, Massachusetts, in the United States.

He completed his high schooling at Newton North High School and graduated in 1985.

Matt LeBlanc's career started with a television commercial in 1987, for Heinz Tomato Ketchup.

In 1988, he won a role in TV 101, which he starred in for one season. His next notable role was as Vinnie Verducci, in the hit comedy sitcom, Married… with Children. Although he didn’t appear in many episodes, he became widely known due to the popularity of the show. He appeared in two very short-lived spin-offs from the show.

Matt LeBlanc biggest success came in 1994 when he joined the cast of Friends, taking the part of Joey Tribbiani. The show ran for ten seasons, shooting LeBlanc to stardom worldwide, and he then played the role for a further two seasons in the spin-off, Joey.

When it was announced that Joey would be finishing, LeBlanc announced he would take a one-year break from acting on television, but it turned into a five-year break for him.

Throughout the 1990s, Matt LeBlanc appeared in several music videos for artists such as Jon Bon Jovi, Alanis Morissette, and Tom Petty. He also acted in several movies, including Lookin’ Italian (1994), Lost in Space (1998), and both Charlie’s Angels movies, in 2000 and 2003.

After his five-year break, Matt LeBlanc returned to the television screen in a show called Episodes, where he played a fictional version of himself. The show first aired in 2011, and ran for five seasons, finishing in 2017.

In 2012 and 2013 Matt LeBlanc made guest appearance on Top Gear, and in 2016, BBC announced LeBlanc would be joining the show as one of their presenters. The show has gone well, and in September 2016, LeBlanc signed a two-year deal to continue with the show.

During his career, Matt LeBlanc has been in eight movies, and eighteen television shows, two of which are currently running – Top Gear and Man with a Plan.

Matt LeBlanc has been nominated for over 40 awards, mostly for his role as Joey in Friends. He has won several of the nominations, including:

In 2003, Matt LeBlanc married Melissa McKnight, an American model. They have a daughter, Marina, who was born in 2004, and McKnight had two children from her previous marriage. The couple separated early in 2006, finalizing their divorce later that year.