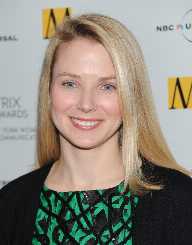 Former president and chief executive of Yahoo, Marissa Mayer was born on the 30 May 1975 in Wausau, Wisconsin in the United States.

Marissa Mayer graduated from Wausau West High School (class of 1993)  and then enrolled at Stanford University. She graduated from Stanford University with a Bachelor of Science degree in Symbolic Systems (1997) followed by an MS in Computer Science (1999). For her degrees, she concentrated on artificial intelligence. She was awarded an honorary degree from the Illinois Institute of Technology for her research.

Marissa Mayer started out working for Google as a software engineer. She is a self-described geek who told Fortune Magazine in 2008 that moving into management and giving up programming had initially been a challenge because it took her out of her comfort zone.

Marissa Mayer rose to become a vice president at Google. In July 2012, she took over the role of CEO at Yahoo. In January 2017 it was announced that Mayer would be leaving Yahoo and during the course of the year as all websites owned by Yahoo officially became part of Verizon, Mayer departed with an almost $260 million payout. Since leaving Yahoo, Mayer has concentrated on Lumia Labs involving consumer media and artificial intelligence. She is also on a number of boards including Walmart.

Marissa Mayer married Zachary Bogue in 2009. Bogue is an entrepreneur, lawyer and real estate investor. The couple has three children.