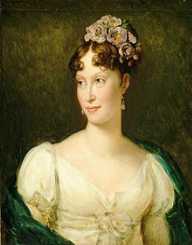 Marie Louise was an Austrian Princess who later married King Napoleon of France and became his Empress.

Marie Louise was born a duchess on December 12, 1791, in Vienna, Austria. The daughter of Archduke Francis of Austria by his wife Maria Theresa of Naples, she raised in the Hofburg Palace in Vienna. She was the eldest child in the royal family.

She was schooled in diplomacy, home management, and public administration. Marie Louise studied and mastered several European languages. She had fluency in her native German and Latin. She also spoke English, Spanish, French and Italian well.

She grew up when Austria was in constant war with the French. She saw Austria defeated on three occasions. By the influence of her grandmother and the experiences she saw during her early years, Marie Louise deeply hated the French.

Emperor Napoleon Bonaparte of France approached several European kingdoms for a bride. Due to constant wars in Europe, he wanted a political marriage to solidify his empire. He also wanted a wife to bear him a son, since his wife Josephine had not given him any. Napoleon approached the Russian crown with his marriage proposal. The Russian relented on his idea. The Austrian King Francis II seized the opportunity. He sent his envoy to France to negotiate the terms of the union.

On February 7, 1810, a marriage contract was formalized by the two kingdoms. Though Marie Louise hated the French, she agreed to the marriage on the request by her father. On April 1, 1810, an official wedding was conducted in France. Marie Louise became the second wife King Napoleon of France. She assumed the title Empress of France.

Marie Louise settled fast in her royal duties. She conducted her affairs with utmost efficiency. On March 20, 1811, Marie Louise delivered a son. Napoleon named the prince after himself. Prince Napoleon II was given the official title of the King of Rome. The marriage brought in a permanent period of peace between the two former warring kingdoms.

In 1812 Napoleon tried to invade Russia. He was defeat and his army routed. After the disastrous Russian campaign, he went to war again. In 1813 Napoleon went to war with Germany. He made Empress Marie Louise the royal regent with limited powers. She ruled France under supervision while Napoleon was on the battlefield. In response to Napoleon’s threat in Europe, several kingdoms agreed to invade France. In October 1813 Napoleon was defeated in the last German battle in the city of Leipzig.

In 1814, France became a besieged kingdom. In March that year, the allied kingdoms approached Paris. In April 1814 Napoleon surrendered to the allied kingdoms. He abdicated the throne on April 11, 1814. Through a treaty signed with the Allied armies, Napoleon went into exile in Elba. Marie Louise was given power over the duchies of Parma, Piacenza, and Guastalla.

In March 1815, Napoleon returned to France and reinstated himself as Emperor of France. The allied kingdoms invaded France again. Napoleon’s army was defeated again. In October 1815 Napoleon was forced into exile in Saint Helena, off the coast of Brazil.

The allied kingdoms ratified a treaty recognizing Marie Louise as the Duchess of Parma, but stripped her son of any claim to the throne. She stayed in Italy until her death.

As the ruler of Parma, Marie Louise managed to endear herself to her subjects. She used her charm, diplomacy, and influence of her companion Neipperg to effectively discharge her administrative duties. She pardoned the dissidents who were imprisoned after a revolt against the Austrian appointed prime minister in 1831. In Parma, Marie Louise was the listening Duchess.

Marie Louise was married to Napoleon and became the Empress of France. In 1821 Napoleon died in exile, Marie Louise married Adam Von Neipperg. In 1829 Neipperg died. In 1834 she married Charles-Rene de Bombelles. She stayed with him until her death.

Marie Louise died on December 17, 1847. She became ill for some days and never recovered. Her body was buried in Vienna, in the Imperial Crypt in accordance with the Catholic traditions.

She was a young woman when she became the French Empress Marie Louise. She managed to inspire the royal court with her decorum. She stayed close to her husband during his first exile.

During her reign in Italy, she became known as the listening ruler. Historians remember her as a selfless queen for her marriage to two men of less noble status.

Her artifacts are preserved in galleries in France, Italy, and Austria.