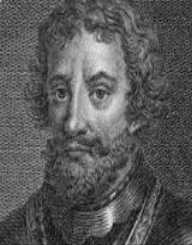 Mac Bethad mac Findlaich was born c. 1005. His father was Findlaech of Moray, and Malcolm II may have been his grandfather.

In 1032, Macbeth stepped into the role of Mormaer of Moray. By taking the lordship, Macbeth most likely killed Gille Coemgain, the mormaer that ruled before him.

He then married Gruoch, the widow of Gille Coemgain. The couple did not have any children.

In 1040, the ruling king, Duncan I, attacked Moray. Duncan died during the battle, which meant Macbeth became King of Alba.

Macbeth ruled for 17 years. His reign was peaceful except for one battle in 1054 when the English invaded.

In 1057, Macbeth died in battle, where the future Malcolm III defeated him. Macbeth's stepson, Lulach, succeeded him, but Lulach also died at the hand of Malcolm III.

His burial was at Iona, the resting place of Scottish kings.

William Shakespeare told the story of Macbeth in his play by the same name. Shakespeare based his production on works published in 1577, that was not an accurate depiction of Macbeth.